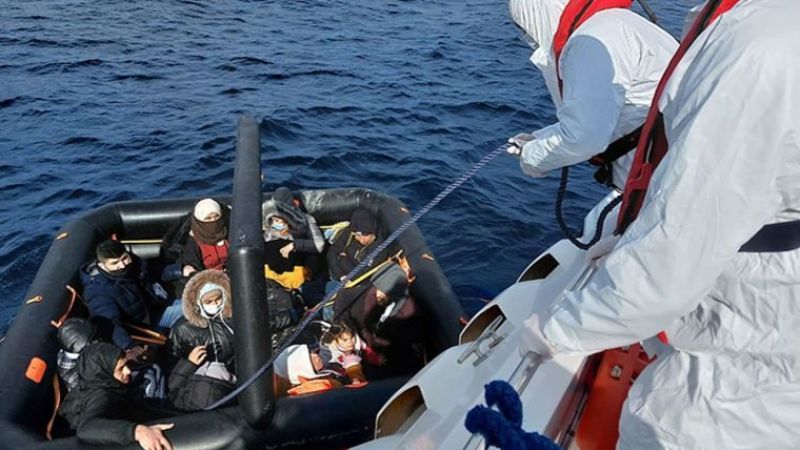 In a militarised border zone, in the dead of night, asylum seekers say they have been coerced into violent, illegal pushback operations run by Greek police.

Kept locked up between operations, the asylum seekers claim they were forcibly recruited or lured there by a Syrian man living in a container in the yard of a Greek police station, and then used as boatmen to ferry other migrants back to Turkey.

Six migrants, Syrian and Moroccan, have told how they participated in pushback operations on the Evros river under duress, in return for a police note permitting them a month’s stay in Greece. Two of the men described themselves as “slaves”. They said they witnessed Greek police strip, rob and assault asylum seekers before they were put back into overcrowded inflatable boats that the men were then ordered to transport back across the deep and fast-running river to the Turkish bank.

A joint investigation by the Guardian, Lighthouse Reports, Le Monde, Der Spiegel and ARD Report München has obtained visual evidence to corroborate the men’s testimony, and documents confirming their detention and later release by Greek authorities. The men were among those who responded to the Facebook group Consolidated Rescue group, which had asked people to speak out on the practice.

Reports of pushbacks have multiplied since March 2020 when thousands of people, many herded there by Turkish authorities, arrived at Greek borders after Turkish president Recep Tayyip Erdoğan announced he had opened “the gate” into Europe. Greek authorities and its prime minister, Kyriakos Mitsotakis, have constantly rejected allegations, insisting that Greece has a “firm but fair” migration policy.

But local people in border villages talked openly of the asylum seekers, usually masked, who “work” for police, and two senior Greek officers confirmed the practice of using third-country nationals as proxies in pushbacks.

The men themselves alleged systematic coercion. Bassel*, a Syrian, said he spent three months in a police cell at Tychero, near the Greece-Turkey border, pushing others back.

Bassel had crossed the Evros into Greece, hoping to claim asylum. His group was met by Greek police who he says beat them with batons and drove them to Tychero police station. There they were ordered to strip and crammed into overcrowded cells.

After being identified as an English speaker, Bassel said he was pulled out and offered a deal: he would work for the police or be charged with human smuggling and go to prison. In return for a permit to remain in Greece for one month, he would remain locked up during the day and released at night to push back other asylum seekers.

Bassel* said he was told the “work” would be unpaid but he could take his pick of the migrants’ belongings. Two others told the same story of recruitment and of the beatings that ensued if anything went wrong during an operation.

“This work is very dangerous, also because of the enmity between the Greeks and the Turks,” Bassel said. Police sources speaking to the investigation confirmed that it is to avoid confrontations with Turkish security forces that proxies like Bassel are used.

Three Syrians held at another police station, Neo Cheimonio, told a similar story. All had paid up to €5,000 (£4,300) to an Istanbul middleman to cross into Greece via a smuggler, who said there would be a Syrian waiting for them with Greek police. They were horrified to realise they were expected to row migrant boats back to Turkey in exchange for their own crossing.

One of them, Farhad, said they were regularly threatened by a Syrian calling himself “Mike”, who worked at Neo Cheimonio, assisting police in illegal pushbacks and recruiting and coordinating asylum seekers.

Farhad said he initially refused to participate but was told by “Mike” he risked not just losing his money but “vanishing” if he returned to Istanbul.

“Mike”, who lived in the police station grounds, would search apprehended asylum seekers on the river bank before they were sent back. He was particularly keen on gold jewellery, and became violent if people did not hand over valuables.