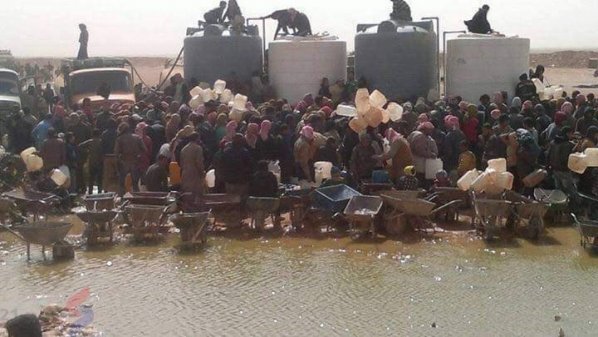 Jordan suspended almost all aid to the 70,000 people, mostly children and women, on June 21, 2016. The action followed an attack by the extremist armed group Islamic State, also known as ISIS, on a nearby border post that killed seven Jordanian soldiers and wounded 13. Since the attack, the United Nation’s World Food Program, the International Committee of the Red Cross, and Médecins Sans Frontières (MSF) have reported that Jordan has stopped all food and medical aid deliveries, and almost all water deliveries to the 70,000 people aid agencies say are living in tents near the berm, half of whom are children. People stuck at the berm rely on food and medical assistance for survival.
There are no toilets, electricity or running water at the berm. Families pitch homemade tents of blankets and rope for protection from the blazing sun and wait. Activists and aid officials say some children and the elderly have died because of lack of food, water and medical care since Jordan closed the border.