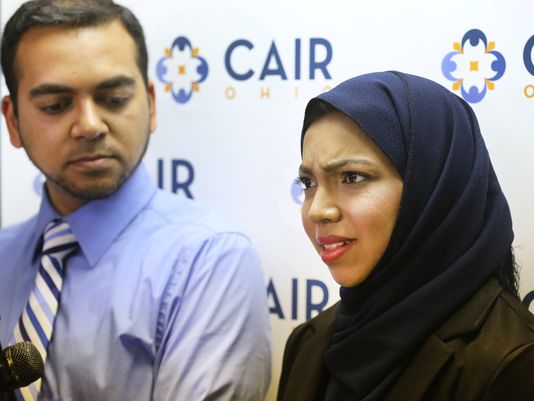 A Muslim couple who accused Delta Air Lines of Islamophobia for throwing them off a flight have spoken of their ordeal for the first time. Nazia Ali had removed her sneakers, finished sending a text message to her parents and was putting on headphones and settling into her seat for the nine-hour flight from Paris to Cincinnati when a Delta Air Lines crew member approached her and her husband, Faisal.
They were excited to come home July 26 to West Chester Township to see their three young sons following a 10th-anniversary trip to London and Paris, “the city of romance and love,” he said.
What happened next would overshadow the good times they’d enjoyed: A flight crew member had complained to the pilot that she was uncomfortable with the Muslim couple in the second row of economy class. The woman was wearing a head scarf and using a phone, and the man was sweating, she allegedly told the pilot. The pilot contacted the ground crew. He would not take off until couple was removed.
“We had been in our seats for 45 minutes,” Nazia Ali, 34, said Thursday from the Cincinnati area office of the Council on American-Islamic Relations in suburban Blue Ash. “The ground agent said, `Can you step out with me? We’d like to ask you a few questions.’ So I said, `Do you want us to get our things?’ And he said, `Yes, please grab all of your personal belongings. You’re not going to be on this flight.’ “