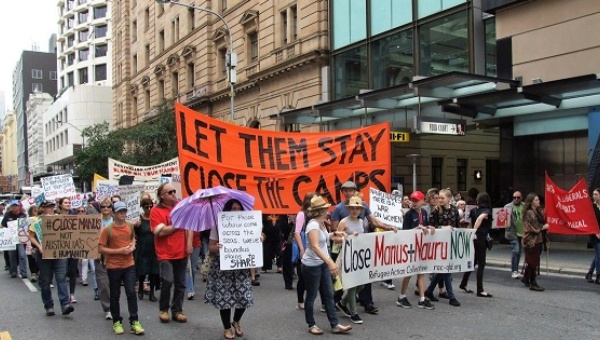 Leaked documents reveal hundreds of incidents of abuse at the offshore refugee detention centers.
Bowing to public pressure, Australia and Papua New Guinea Wednesday announced an agreement to close an Australian prison camp for asylum seekers on Manus Island, although it’s not at all clear what will happen to the nearly 800 refugees currently housed in the detention center.
Manus Island is off the coast of Papua New Guinea and under Australian law, anyone intercepted trying to reach the country by boat is sent there for processing.
They are never eligible to be resettled in Australia.
“Both Papua New Guinea and Australia are in agreement that the centre is to be closed,” Papua New Guinea Prime Minister Peter O’Neill said in a statement on Wednesday, following a meeting with Peter Dutton, Australia’s immigration minister.
“We have known for years that we are torturing, abusing and indefinitely detaining people on Manus Island and Nauru,” spokeswoman Sam Castro from the group told ABC. “It is not good enough for the immigration minister to brush it all under the carpet and say, ‘there is nothing to see here’ … I think it is appropriate for our parliament to investigate these matters.”
The announcement follows the recent leak of confidential documents disclosing more than 2,000 incidents of sexual abuse, assault and suicide attempts by despairing detainees at the Manus Island Regional Processing Centre.