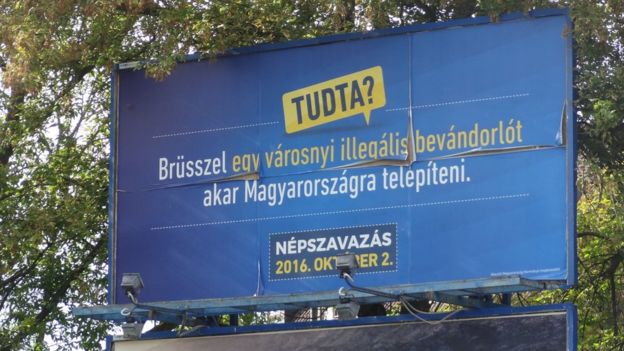 A poster war has broken out in Hungary, within weeks of a referendum on European Commission proposals to redistribute asylum seekers more evenly across the EU. Since the 2 October referendum was announced in February, public spaces and the media have been inundated with the government’s messages, such as:
– Did you know that the Paris terror attacks were carried out by immigrants?
– Did you know that nearly one million immigrants want to come to Europe from Libya alone?
– Did you know that since the start of the immigration crisis, harassment of women has increased in Europe?
A government source told the Nepszabadsag daily that the campaign had cost €10m (£8.5m; $11.2m) in public money.
In response, the satirical Two-Tailed Dog Party has raised €100,000 from 4,000 people, through crowdfunding, for their own rival posters and billboards. These mock the government’s messages, in both style and content. There are 27 versions, which include:
-Did you know there’s a war in Syria?
-Did you know a tree might fall on your head?
-Did you know that in the 16th Century in Somogy county, 42 people were attacked by bears?
-Did you know one million Hungarians want to emigrate to Europe?
“We can’t really do anything about all the people who spend their days hating migrants, people who have probably seen more aliens from other planets in their lives than immigrants,” party leader Gergely Kovacs said.
“What we can do is appeal to the millions in Hungary who are upset by the government campaign. We want them to know they are not alone.”