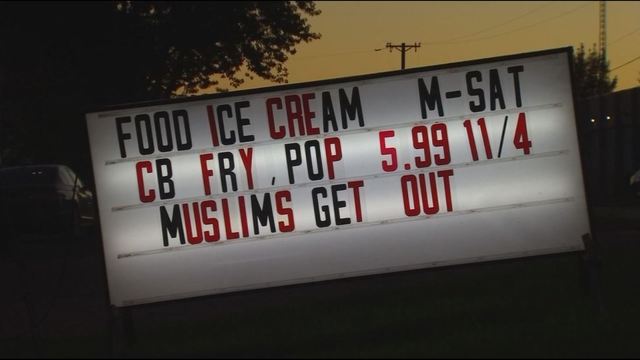 Restaurant owner sparked outrage in Minnesota this week after he changed the sign outside his establishment to read “Muslims get out”—a message he insists people are “taking it the wrong way.
The sign, which was erected following the ISIS-affiliated stabbing attack in nearby St. Cloud, attracted a gaggle of protesters outside Treats Family Restaurant on Monday. They decried the sign as offensive and inherently Islamophobic, but the restaurant owner offered an unusual argument to insist that the message was being misinterpreted.
“I didn’t want to put ‘terrorist’ on the board, so we were going to put ‘Muslim extremist,’ but we didn’t have room on the board,” Dan, the restaurant owner, told FOX 9 News. “People started taking it the wrong way and thinking we were against Muslims in general and we’re not, quite the opposite. We are not racist.”