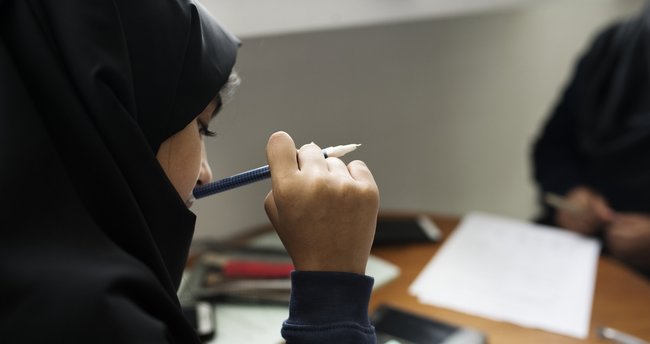 A school district in Essex County is investigating an allegation of discrimination by a teacher against a Muslim second grader. CBS2’s Meg Baker spoke with the girl’s mother. “I try to teach them modesty and teach them what God wants us to do and what is our purpose here,” said Cassandra Wyatt.

Wyatt’s 7-year-old daughter and her sister have been wearing the hijab, or a head scarf, since they were very young. They are Muslim. Wyatt says her daughter’s second grade teacher at Seth Boyden Elementary School in Maplewood forcefully removed the hijab from her head this week. “She said ‘Yes mommy, she pulled my hijab off.’ She was pulling it off, so she walked up to me and said you cant wear that in here. And then she pulled it off. And when she went to pull it off, Sumayyah said she was trying to hold it, like ‘No, no this is my hijab, this is my hijab.’ And she finally got it off, and then she looked at her hair and said ‘well, your hair is nice.’ And Sumayyah said ‘Oh, thank you,’ and put the hijab back on, and the entire class seen it,” Wyatt said.

Now there’s an investigation. CAIR-NJ, the Council on American Islamic Relations, a civil rights advocacy group for Muslims, is calling for the teacher’s removal. “The teacher not only put her hands on her, removed her headscarf. And this is, of course, humiliating for any Muslim woman to be exposed this way, in public,” said CAIR-NJ Executive Director Selaedin Maksut. No one from the school district would go on camera, but in a statement the district says “Regardless of the results of the investigation, we are committed to restorative practices to help our students, staff and families process the social-emotional harms done.” Wyatt calls the hijab a form of God’s protection. She say her daughter is traumatized and now doesn’t want to wear it.

“First time we came outside, which was the next day, which Thursday, yesterday, and twice she took the hijab off her head, and she kind of, like, balled it up,” Wyatt said. CAIR-NJ wants the school to take further steps to tackle the issue. “Training their teachers and educators, and also adopting curricula for the students to learn more about Islam and Muslims,” Maksut said. Sumayyah has not been back to school since the alleged incident. The school district says social media is not a reliable forum for due process, and the staff members involved are entitled to due process before any action is taken. The district also says personnel and student matters are kept confidential due to legal obligations.