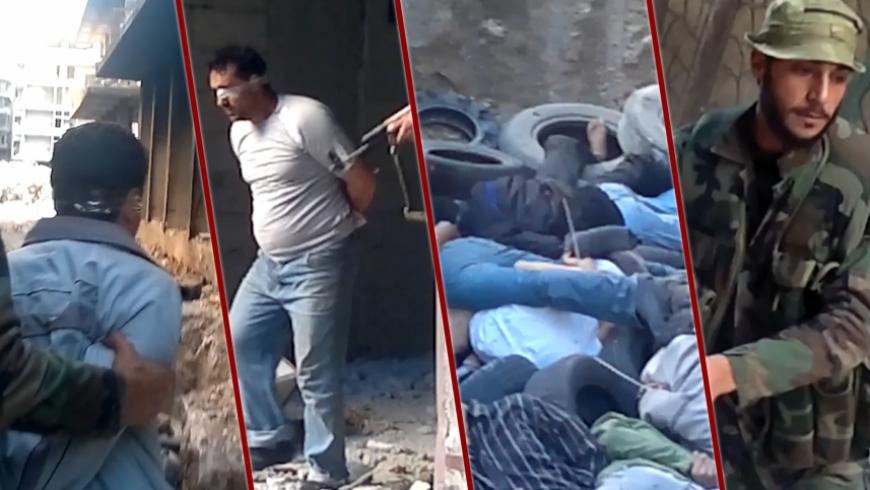 After a rookie militiaman secretly watched a video of 41 people being brutally killed, he knew he had to get the horrific images to the outside world Warning: this report contains images readers may find upsetting by Martin Chulov, Middle East correspondent

On a spring morning three years ago, a new recruit to a loyalist Syrian militia was handed a laptop belonging to one of Bashar al-Assad’s most feared security wings. He opened the screen and curiously clicked on a video file, a brave move given the consequences if anyone had caught him prying.

The footage was unsteady at first, before it closed in on a freshly dug pit in the ground between the bullet-pocked shells of two buildings. An intelligence officer he knew was knelt near the hole’s edge in military fatigues and a fishing hat, brandishing an assault rifle and barking orders.

The rookie militiaman froze in horror as the scene unfolded: a blindfolded man was led by the elbow and told to run towards the giant hole that he did not know lay in front of him. Nor did he anticipate the thud of bullets into his flailing body as he tumbled on to a pile of dead men beneath him. One by one, more unsuspecting detainees followed; some were told they were running from a nearby sniper, others were mocked and abused in their last moments of life. Many seemed to believe their killers were somehow leading them to safety.

When the killing was done, at least 41 men lay dead in the mass grave in the Damascus suburb of Tadamon, a battlefront at the time in the conflict between the Syrian leader and insurrectionists lined up against him. Alongside piled heaps of dirt that would soon be used to finish the job, the killers poured fuel on the remains and ignited them, laughing as they literally covered up a war crime just several miles from Syria’s seat of power. The video was date-stamped 16 April 2013.

A paralysing nausea took hold of the recruit, who instantly decided the footage needed to be seen elsewhere. That decision has led him, three years later, on a perilous journey from one of the darkest moments of Syria’s recent history to the relative safety of Europe. It has also united him with a pair of academics who have spent years trying to get him – the prime source in an extraordinary investigation – to safety while identifying the man who directed the massacre and persuading him to admit his role.

It is the story of a war crime, captured in real time, by one of the Syrian regime’s most notorious enforcers, branch 227 of the country’s military intelligence service that also details the painstaking efforts to turn the tables on its perpetrators – including how two researchers in Amsterdam duped one of the most infamous security officers in Syria through an online alter ego and seduced him into spilling the sinister secrets of Assad’s war.

Their work has cast an unprecedented light on crimes previously believed to have been widely committed by the regime at the height of the Syrian war but always denied or blamed on rebel groups and jihadists.

Nine years later, as war rages in Ukraine, a playbook of state terror on civilian populations rehearsed in Syria is being redeployed by Russian forces, as Vladimir Putin’s so-called special military operation turns into a brutal occupation of parts of the east of the country. Military intelligence units there have been at the forefront of savagery, instilling fear into communities through mass detentions and killings of the type that characterised Assad’s brutal attempts to claw back power.