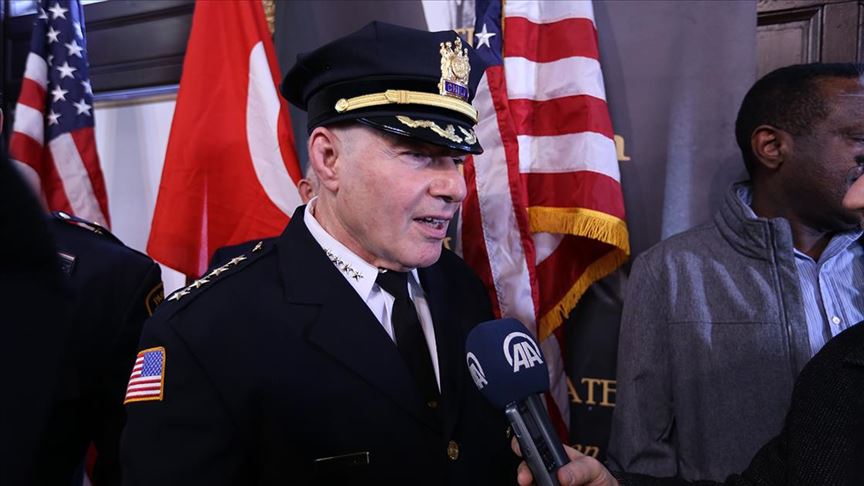 The United States’ first-ever Turkish and Muslim police chief became the victim of a campaign of racist threats sent to him via text, local authorities said on March 2.
İbrahim ‘Mike’ Baycora, a first-generation Turkish-American immigrant, was appointed as the 17th police chief of the city of Paterson, New Jersey, last month.
The historic ceremony saw him swear on the Quran instead of the Bible, with representatives from the Turkish community in New York and New Jersey in attendance, as well as an imam.
Yet it did not take long for Baycora to find himself of the receiving end of threats due to his race and religion.
Stefan Keco, 28, was charged on Feb. 28 for sending “threatening text messages to Chief Baycora with the purpose to intimidate him because of the chief’s religion, race and national origin,” Passaic County Prosecutor Camelia Valdes said in a statement.
He is being held at the Passaic County Jail pending a court hearing on March 5.
Protective barriers were erected in front of Paterson Police Headquarters on March 2 due to the severity of the threats, local media reported.
Local Mayor Andre Sayegh defended Baycora valiantly in response to the incident: “The message should be sent loud and clear: You can’t mess with our police chief. Especially if you’re messing with him because of his faith.”
The timing of the threats coincides with a continued debate by the Paterson City council on whether to allow mosques and other places of worship to amplify prayer calls, according to local media.
Source: Hurriyet Daily News