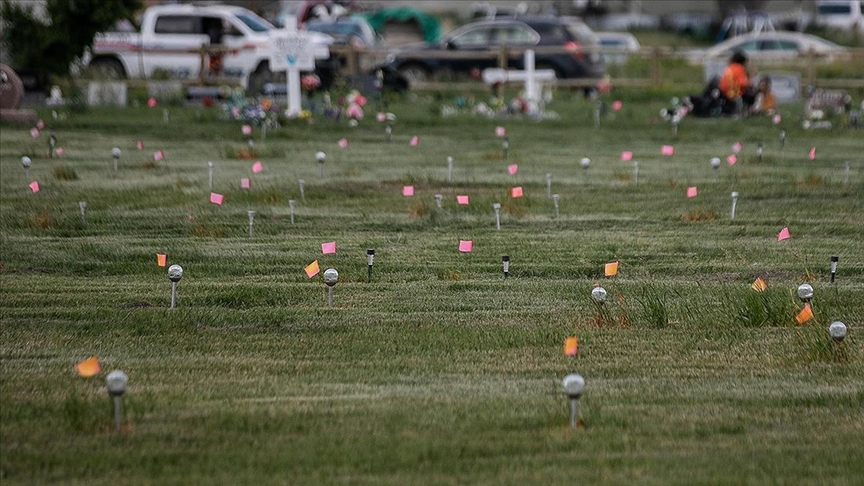 A First Nation in Alberta says new archival work has helped explain numerous discoveries of human remains that it now believes are the unmarked graves of residential school students.

Saddle Lake Cree Nation revealed on Tuesday that since 2004, there have been numerous discoveries of partial remains that were accidentally excavated while new graves were being dug in the community’s cemetery, which is near the former Blue Quills residential school site.

Saddle Lake Cree Nation is about 170 kilometres northeast of Edmonton.

While community members who discovered the remains were at the time unsure about what they found and reburied them, a team tasked with investigating burial sites connected to the school now believes it’s been uncovering the shallow, unmarked graves of children between the ages of four and 10 who perished at the school.

“There were children-sized skeleton remains that were excavated. None of these skeleton remains were in caskets,” Saddle Lake council member Jason Whiskeyjack said at a news conference on Tuesday.

Large said Catholic Church records obtained by investigators show that 212 students died at the school between 1898 and 1931. The number vastly outstrips federal records, which accounted for about 25 student deaths, he said.

The records were provided to investigators by the Diocese of St. Paul, diocese staff member Catherine Warholik confirmed on Tuesday.

However, Warholik said that the burial records are for the parish, not specifically for the residential school, and that Bishop Paul Terrio says neither registers nor burial records for the school have been found.

Leah Redcrow, director of stakeholder engagement for the Acimowin Opaspiw Society, said investigators’ understanding is that the parish burial records would include students at the school and that the staff of the church and school were the same people.

Traumatizing discoveries
The team does not know how many remains have been unearthed over the years because, at the time, members didn’t know what they were finding, Large said.

In 2004, the community discovered what it believes to be a mass grave.

“The mass grave had numerous children-sized skeletons wrapped in white cloth. This could possibly be from when there was an outbreak of typhoid fever in the school,” Whiskeyjack said.

Large and Whiskeyjack said they themselves are among the community members who have discovered remains in the past while helping dig new graves, adding that when remains are found, they are reburied.

Whiskeyjack said the last time he hit an unmarked grave while excavating a new one was in December.