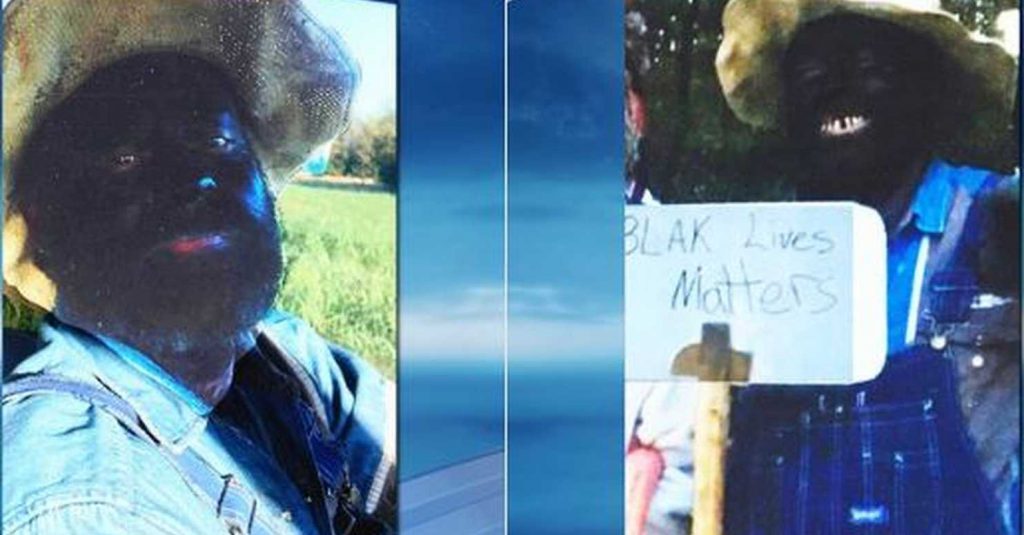 The white Arkansas school board member’s Halloween costume was extremely detailed — and deeply offensive.
In the pictures, every part of Ted Bonner’s face is painted black except his lips, which are a garish red, hiding imitation gapped teeth. He’s wearing bib overalls and a straw hat. And in his hands, he’s holding a handwritten sign that says “Blak Lives Matters.”
The photos were snapped on Halloween, but began circulating on social media last week, when Bonner’s blackface morphed into a black eye for his community.
“I’m really embarrassed about the whole situation,” Blevins School Superintendent Billy Lee told The Washington Post.
Lee oversees the three schools in Blevins, a town of 315 people, 100 miles southwest of Little Rock. In this town, 17 percent of the population is black.
“It’s not the way I was raised. It’s not the way I am. It’s not the way our students are or our schools,” Lee said.
Bonner offered a “very sincere apology” at the county school board meeting Monday night, Lee said.
But many people in the community want him off the board.
Lee didn’t say whether he thought Bonner should resign. But as superintendent, Lee can’t force a school board member to do anything.
“He’s actually my boss,” Lee said. “Neither the school board nor the administration holds the power to discipline or remove a school board member. Only the voters have the power during the next school board election.”
Bonner is up for reelection in 2018, Lee said.
No one answered the phone at a number listed for Bonner.
The Arkansas NAACP demanded that Bonner resign immediately.
“Ted Bonner’s services as a school board member that oversees a district of racially and culturally diverse students is an egregious act,” President Rizelle Aaron said in a statement to local media.
Bonner “has conducted himself in a manner that is unbecoming of an elected official and has brought embarrassment and negative national attention to the Blevins School District and the great state of Arkansas.”