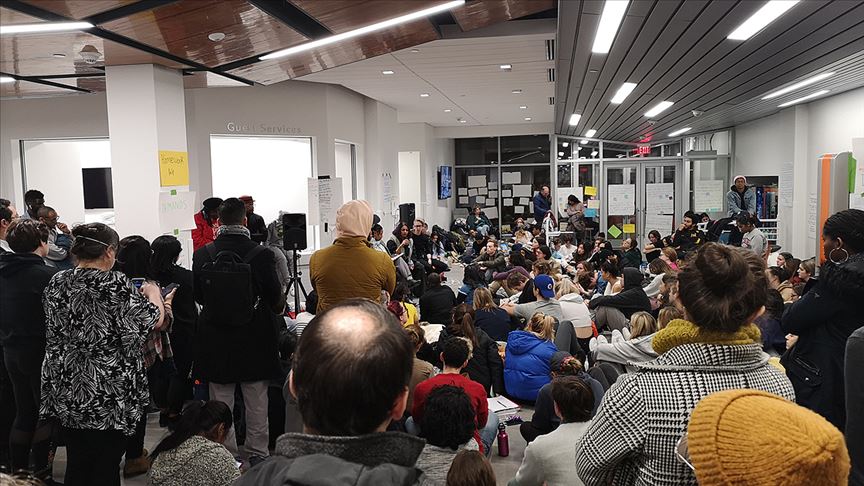 Police arrested a Syracuse University student in connection with a series of new graffiti markings in support of protests against several recent racist incidents on campus, authorities said Thursday.
Syracuse Police Sgt. Matthew Malinowski said the student is accused of criminal mischief in the fourth degree and of making graffiti. The suspect was identified in connection with four incidents of graffiti in and around the Irving Garage and Bird Library, Syracuse University Department of Public Safety said.
The arrest comes after a series of racist incidents, and the university leadership’s slow response to it, have sparked student protests and a sit-in on campus.
Some of the protesters had proposed 19 recommendations to the university administration, and on Thursday, Chancellor Kent Syverud said he agreed to sign 16 of them. He suggested “minor revisions” to the three others, and also said he planned to meet with Jewish students on Thursday morning.
“Implementing these recommendations is the right thing to do. They will make our community stronger,” he said.
Syverud previously noted that a total of 12 cases of racist and anti-Semitic graffiti have been found on or next to Syracuse’s campus to date.
Police are still investigating four recent incidents of racist graffiti in other areas of campus. Two of the incidents, both in Day Hall, used language derogatory to African-Americans. In a third incident, in Flint Hall, a post-it note had anti-Native American language on it. And in the fourth incident, at the Comstock Art facility, graffiti had racist language derogatory to Asians, according to police.
In addition, four students have been suspended for participating in a verbal assault directed at an African-American student last week, Syverud announced Wednesday.
A total of 14 people were involved in the incident, 10 of whom were referred for “appropriate discipline,” Syverud added. Nine were students from other schools and have been referred for discipline at the schools they attend.
“The New York State Police’s hate crimes task force has been partnering with us and we’re working with the New York State Division of Human Rights on this matter,” Syverud said while briefing the university’s senate.
Source: CNN