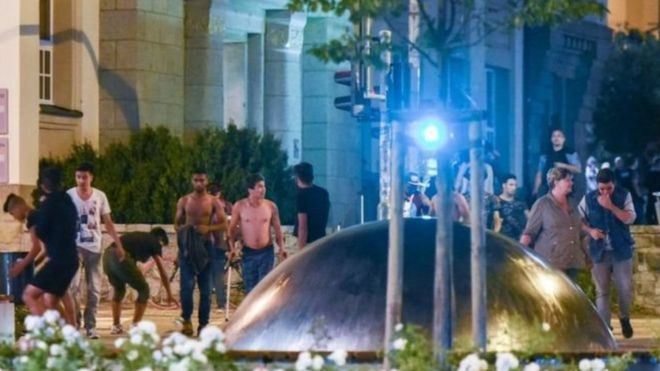 Far-Right protesters blocked an ambulance reaching an injured asylum seeker after violent clashes broke out between the two groups in an east German town.
Witnesses in the town of Bautzen described running street battles between teenage asylum-seekers throwing bottles and far-Right protestors shouting neo-Nazi slogans.
More than 100 police officers were needed to end the violence between around 80 far-Right activists and some 20 mostly teenage asylum-seekers, at least two of whom were injured.
The clashes in the town of around 40,000 people began at around 8.50pm local time on Wednesday evening in the Kornmarkt, a central square.
“When the police arrived, a crowd of around 80 young men and women had gathered. The apparently violent persons were largely from the far-Right,” the police said in a statement.
“They chanted slogans that Bautzen and the Kornmarkt belong to Germans. Ranged opposite them was a group of around 20 young asylum-seekers.
“Verbal and physical altercations had already taken place between the two groups. Witnesses described bottle throwing and bodily injuries.”
“This is our Nazi neighbourhood,” one witness described the protesters as chanting.