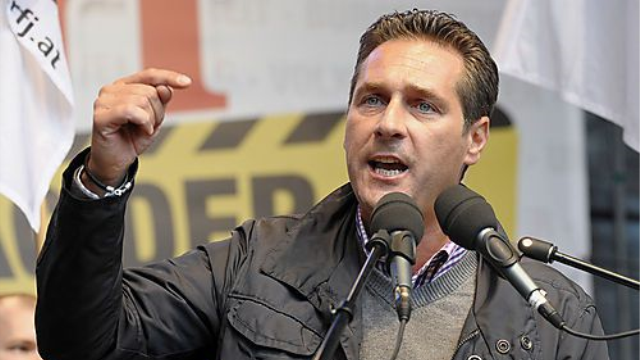 The head of Austria’s far-right Freedom Party (FPÖ) has branded Angela Merkel Europe’s most dangerous politician and says her migrant policy has paved the way for a possible civil war.
The comments came from Heinz-Christian Strache, in a speech delivered for the Austrian National Day that takes place on Wednesday 26th October.
Strache was speaking in front of hundreds of listeners in the Epstein Palace in Vienna where he not only spoke out against the red-black “stagnation coalition” government of the Conservatives and Social-Democrats which rules Austria, but also targeted German chancellor Angela Merkel.
He said that in his opinion Merkel’s migrant policy had been “criminal” and had provided an unrestrained influx of migrants which put the whole of Europe at risk.
Strache said: “She is the most dangerous politician in Europe. With her welcoming policy she opened the door for Islamists, poor immigrants and soldiers of fortune, whose worldview does not fit into modern Europe.”
He said that the move had been “pre-programmed” to fail and added that he would not even rule out civil war in Europe as a consequence.
He added: “There are people coming to us who do not even think about integrating. Ethnic and cultural external immigration should never have been allowed to exceed a certain limit.”
Strache has also criticised the European Union, although underlining at the same time that an Austrian exit from the EU was not an option for his party.