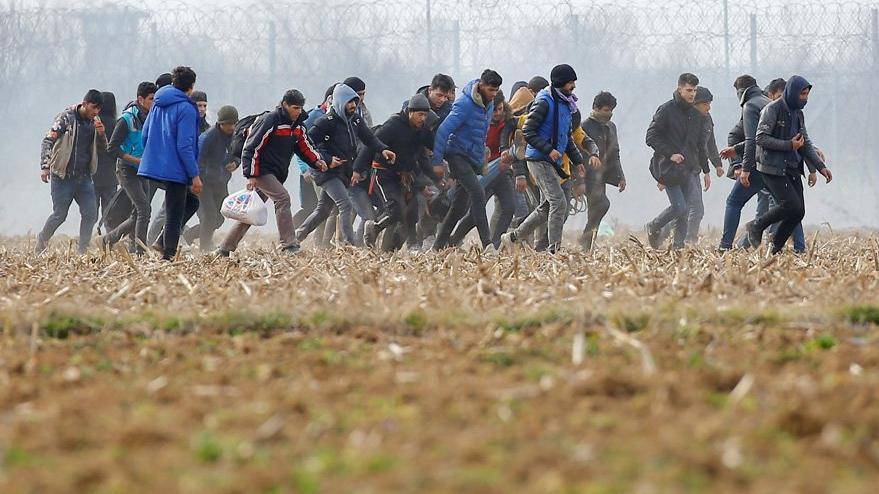 Thousands of asylum seekers, aid workers, United Nations, and Greek and European Union employees may be at risk of lead poisoning in a new migrant camp that Greek authorities have built on a repurposed military firing range on the island of Lesbos, Human Rights Watch said today.
Firing ranges are commonly contaminated with lead from munitions, nevertheless the authorities did not conduct comprehensive lead testing or soil remediation before moving migrants to the site in September 2020. Evidence collected by migrants moved to the site also indicated that authorities have also failed to clear all unexploded mortar projectiles and live small arms ammunition, which could injure or kill if disturbed or handled.
“Putting thousands of migrant adults and children, along with aid workers, on top of a former firing range without taking the necessary steps to guarantee they would not be exposed to toxic lead is unconscionable,” said Belkis Wille, senior crisis and conflict researcher at Human Rights Watch. “The Greek authorities should promptly conduct a comprehensive site assessment of soil lead levels and release the results.”
In November and early December, Human Rights Watch interviewed four people living in the camp, two aid workers, one Greek migration ministry employee working in the camp, and four medical and environmental experts, and reviewed academic research on the risk of soil lead contamination at shooting ranges and medical research on the health risks of lead poisoning. Human Rights Watch did not have access to conduct on-site research, but analyzed photos and videos of the site and satellite imagery to confirm the firing range location.
The Asylum and Migration Ministry began major construction work at the end of November at the site, called Mavrovouni camp, that could disturb any lead contaminated soil, further exposing residents and workers. The work to improve access to electricity and water and reduce the risk of flooding began despite warnings from Human Rights Watch of the potential of increased risk of lead poisoning.
In early September, large fires broke out inside the Moria camp, the Reception and Identification Center on Lesbos that was housing 12,767 migrants, mostly women and child migrants. Within days, authorities constructed Mavrovouni (also known as new Kara Tepe) as a temporary camp and told people that they would begin construction of a new permanent camp for use by June 2021. According to the media, Migration and Asylum Minister Notis Mitarachi, has recently indicated the new camp will only be ready by Autumn 2021. Currently 7,517 people, mostly from Afghanistan and Syria, are staying at Mavrovouni, which started functioning as a military firing range in 1926 and was in use until the camp was constructed in September 2020, Mitarachi said.
In response to letters from Human Rights Watch, Migration and Asylum Minister Notis Mitarachi stated in a November 19 letter that the camp had “no lead contamination,” but provided no evidence for the basis of that assertion. He said the government has agreed to conduct soil testing with the European Commission within one month, but has not revealed the nature of the testing, the areas to be tested, or the methodology. A Hellenic army representative called Human Rights Watch on December 1, stating his intention to respond to a letter received on November 4 from Human Rights Watch, raising urgent concerns. But no response has been received. On December 6, General Secretary for Asylum Seekers’ Reception Manos Logothetis, called Human Rights Watch to dispute the risk of lead contamination at the camp. He confirmed that no soil testing for lead had taken place prior to moving people to the camp, but said that authorities are awaiting the results of soil testing conducted recently in collaboration with the Institute of Geology and Mineral Exploration (IGME).
“No one just shows up without a plan,” Dr. Gordon Binkhorst, vice president of global programs at Pure Earth, told Human Rights Watch. “Sharing of a well-founded work plan beforehand is key to transparency and ensuring confidence in the findings.” Greek authorities should allow independent experts to comment on investigative work plans, audit the soil testing process and collect split samples for independent testing.
“The authorities should share documentation of work completed and a comprehensive site investigation work plan based on a review of the site history, contaminants of concern, a conceptual site model of how such contaminants are released to and migrated in the environment, and a comprehensive testing plan that evaluates the degree and extent of contamination in the environment, and potential exposure routes,” Dr. Binkhorst said.
Firing ranges are well-recognized as sites with lead contamination because of bullets, shot, and casings that contain lead and end up in the ground. Lead in the soil from bullet residue can readily become airborne, especially under dry and windy conditions, which often exist on Lesbos. Lead is a heavy metal that is highly toxic to humans when ingested or inhaled, particularly by children and during pregnancy. It degrades very slowly, so sites can remain dangerous for decades.
The World Health Organization maintains that there is no known safe level of lead exposure. Elevated levels can impair the body’s neurological, biological, and cognitive functions, leading to learning barriers or disabilities; behavioral problems; impaired growth; anemia; brain, liver, kidney, nerve, and stomach damage; coma and convulsions; and even death. Lead also increases the risk of miscarriage and can be transmitted through both the placenta and breast milk.
Small children and women of reproductive age are at particular risk. According to Greek authorities, on November 19, 2,552 out of 7,517 people in the camp were children, 997 of them under age 5, and 1,668 were women – 118 of whom have said they are five or more months pregnant.
Source: HRW