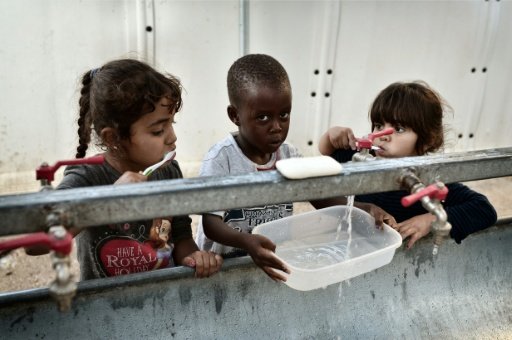 Standing with a group of children outside a refugee camp on the Greek island of Chios, little Roza can’t wait to get an early start to her day.
“Good school, good school!” she beams, her backpack on and pigtails bobbing.
Roza, a Syrian Kurd, is one of a small group of children in Greece’s island camps fortunate enough to get some schooling.
Thousands of others count education as just another loss in the long list of deprivations on the harrowing road from home.
Roza is one of some 270 children who are learning English, mathematics, arts and creative skills with “Be Aware and Share” (BAAS), a Swiss NGO which has been active on Chios since May.
Operating out of a converted former restaurant in the island’s port capital, the 20-strong team runs classes for children from the age of six, as well as workshops for teenagers about cooking or going to the supermarket.
The school also promotes acceptance of other national backgrounds. And hygiene, including toothbrush use.
“We’re not here to replace mainstream school,” says Nicholas Millet, a British volunteer and one of the founders of the BAAS school.
“We provide an academic curriculum (but) for us, this is about children feeling like children again.”
BAAS project manager Jacob Rohde says the programme provides “a drop of normality” for children who also experience regular outbreaks of violence in the camp.
On the mainland, the Greek education ministry last week began after-hours classes for some 1,500 refugee children in 20 schools around the country.
However, there are currently no classes on offer at schools on several islands housing migrant camps.
The education ministry says children in island camps, many of whose parents have applied for asylum and are waiting to be relocated to the mainland, are on hold as their transfer could be imminent.
But Matina Katsiveli, a former magistrate who helps run a refugee support group on the island of Leros, says such a procedure could take up to six months.
“These children cannot mill about all day doing nothing… this is a very big mistake,” she says.
“And keeping them indoors with nothing to do will be difficult, especially now that winter is coming,” adds Katsiveli, part of an Aegean refugee support network which had been nominated to receive the Nobel Peace Prize.
For some, the notion of allowing refugees to attend Greek schools, even at different hours from the local children, is difficult to accept.
Earlier this week, parents at a Chios school circulated a makeshift questionnaire about refugee children receiving after-hours classes there, the tone of which was clear from the preamble.
“(There is) a difference of culture, socially-acceptable behaviour, religious expression and habits, but it is chiefly a matter of hygiene,” it said.