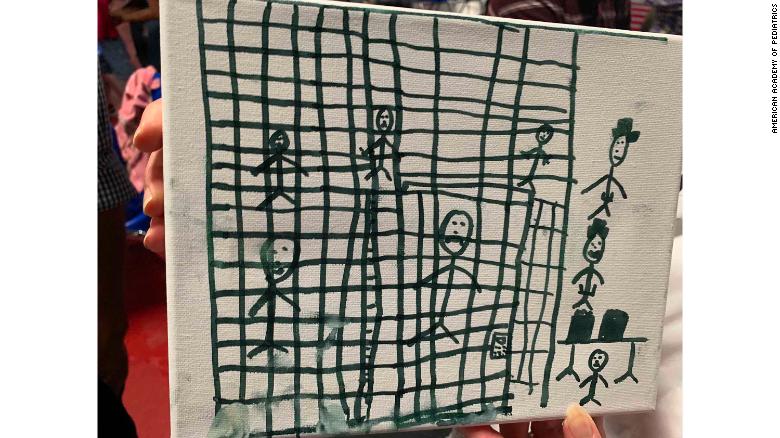 Pediatricians shared disturbing images drawn by migrant children who were recently separated from their parents while in US Customs and Border Protection custody. The drawings show people behind bars and in cages. The pictures were drawn last week by three children, ages 10 and 11, at Catholic Charities Humanitarian Respite Center in McAllen, Texas, after being released by CBP.
The staff at the center asked the children to depict their time in CBP custody. A social worker at the center gave the drawings to the American Academy of Pediatrics, which gave them to CNN.
“The fact that the drawings are so realistic and horrific gives us a view into what these children have experienced,” said Dr. Colleen Kraft, immediate past president of the AAP. “When a child draws this, it’s telling us that child felt like he or she was in jail.”
The pediatricians’ group has been trying to advise CBP on how to screen and care for children in their custody, but Kraft said a series of meetings came to an end without producing concrete results.
Kraft said she and other pediatricians had three phone meetings in December, January and February with Kevin McAleenan, who was then commissioner of the federal agency. McAleenan, who is now acting secretary of the US Department of Homeland Security, requested the meetings after two children died in CBP custody.
“We’re going to continue to seek the AAP’s input as we tackle the crisis,” CBP’s assistant commissioner for public affairs, Andrew Meehan, told when the talks began.
Kraft said she was saddened and disappointed the talks did not result in pediatricians being placed at the border to train CBP medical personnel.
“We made recommendations and our government didn’t follow through with them,” Kraft said Tuesday.
Source: CNN