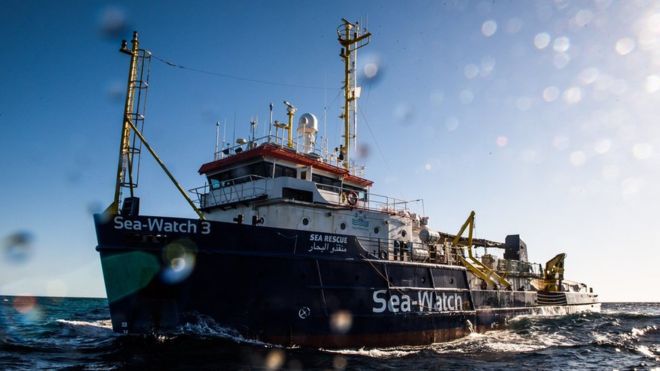 The Sea-Watch 3 NGO boat carrying dozens of migrants rescued in the Mediterranean headed for Lampedusa island on June 26 despite the threat of hefty fines from Italy’s far-right interior minister.
“I’ve decided to enter the port of Lampedusa,” Sea-Watch tweeted Captain Carola Rackete as saying. “I know this is risky, but the 42 shipwrecked on board are exhausted. I will bring them to safety.”
Marine tracking websites showed the vessel had entered Italian territorial waters after spending 14 days sailing back and forth off the coast of Italy’s southermost island.
“Enough, we’re entering. Not to provoke, but by necessity, responsibility,” Sea-Watch tweeted.
Italy’s Interior Minister Matteo Salvini has tried to ban the Dutch-flagged vessel from approaching under a “closed ports” policy, which has seen migrants repeatedly stranded at sea.
“We will use every lawful means to stop an outlaw ship, which puts dozens of migrants at risk for a dirty political game,” Salvini said on Facebook after Sea-Watch said it was headed for Italy.
“I will not give permission for anyone to disembark… Our patience is over. The Netherlands will answer.”
Salvini said Rome’s ambassador to The Hague was “taking a formal step with the Netherlands government.”
“Italy deserves respect: we expect the Netherlands to take in the immigrants on board,” Salvini said.
Italian coastguard and customs vessels approached the Sea Watch as it headed for Lampedusa port.
Soource: France 24