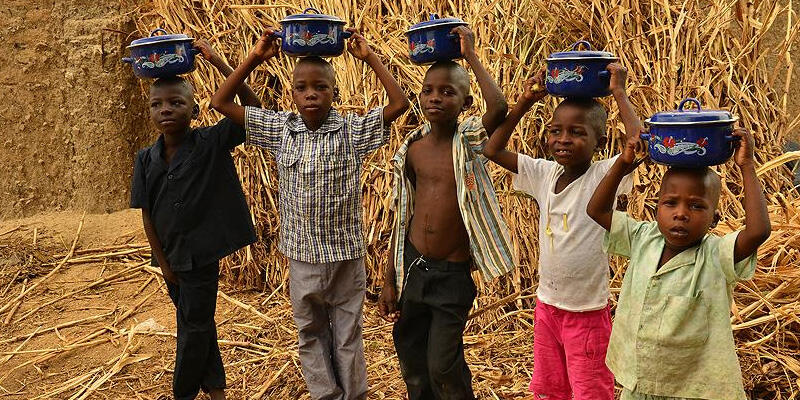 Madam President, Secretary General, I hope that someday I can appear at the Security Council and give you some good news and this is not one of those days of good news. I remember about a year ago when we appeared before on this particular topic with regards to pandemics around the world and the world was still getting to grips with the novel COVID-19 virus, I addressed the Security Council and warned then that the world stood literally on the brink of two pandemics – a health/Covid pandemic and, due to its economic impact and supply chain disruption, a hunger pandemic. I said if we were not careful in how we addressed Covid, the cure could very well be worse than the disease itself.

Armed conflict, compounded by climate extremes and the COVID-19 pandemic, has threatened to push the number of people in the world marching to the brink of starvation from 135 million people, pre-Covid, a year ago to 270 million that we’re looking at now.

And back then you recall I warned famines of biblical proportions were a real and terrifying prospect in over three dozen countries. Thankfully, the world listened, leaders responded around the world with economic stimulus packages, deferred debt for low and middle income countries, safetynet programs, etc, that were implemented – as a result we globally averted a catastrophe.

I’m proud and sad at the same time that, last year, the World Food Programme reached 114 million people with life-saving assistance – the highest annual total in our history.

In 2020, we thought that by the end of the year and by 2021 Covid would be behind us and that the economies and systems would be surging back to normal. Unfortunately, new waves of Covid have been unrelenting and the concerns of 2020 are now a reality for 2021.

So, today, I must warn you that we are once again sliding toward the brink of the abyss.

While Covid is undeniably exacerbating fragility around the world, manmade conflict is driving instability and powering a destructive new wave of famine that threatens to sweep across the world. The toll being paid in human misery is unimaginable. So I want to thank the Secretary-General for his leadership in trying to avert these famines.

In Syria, over 12 million people face crisis levels of food insecurity or worse – an all-time high and up from 9.3 million people.

Sudan, South Sudan, the Sahel, I could go on, and on, and on. Dozens of countries with millions of their children going hungry because armed groups won’t lay down their guns.

Now, 270 million people are facing a hunger crisis and, as the Secretary-General laid out so clearly, famine is a dangerous possibility in over 30 countries. WFP estimates that at least 34 million people are knocking on the door of famine.

These looming famines have two things in common: they are primarily driven by conflict, and they are entirely preventable. With modern forecasting, improved agricultural practices and effective humanitarian organizations, natural disasters no longer plunge populations into famine.

But make no mistake about it: manmade conflict is the real culprit. Displacement, a major consequence of armed violence, means lives are turned upside down, fields are abandoned and harvests are missed. And families forced from their lands become dependent on humanitarian assistance just to meet their basic needs.

The cycle of violence, hunger and despair pulls in more and more individuals and families as the weeks and months pass. But the potential consequences are truly global: economic deterioration, destabilization, mass migration and starvation.

In recent days I’ve seen the suffering inflicted on innocent families caught in the crossfire of these conflicts.

Just two days ago, I was in Yemen, where over 16 million people now face crisis levels of hunger or worse. These aren’t just numbers they are real people. We are heading straight toward the biggest famine in modern history. It is hell on earth in many places in Yemen right now.

I visited the Al Sabeen children’s hospital in Sana’a. While overwhelmingly I found stories of horror, there were also rare stories of hope. But most are stories of pain and hardship. Almost all of the children I met were sick, skin and bones, and dying with entirely preventable or treatable illnesses. If I showed you some of the pictures, you would not believe it and no one with a heart at all could sit idly by and let this continue. No one!

And, what’s really sad is these are the fortunate ones, because they’re actually receiving medical help. I asked one of the doctors how many beds they have. She told me: 25. And I said: what about the children you have to turn away, what happens to them? She replied: they go home to die. Understand, this is at the BEST hospital!

Around 400,000 children may die in Yemen this year without urgent intervention. That is roughly one child every 75 seconds. So while we’re sitting here every minute and a quarter a child is dying. Are we really going to turn our backs on them and look the other way?

Like a five-month-old little girl, Soja, I was in her room two days ago she was lying in the arms of her mother on the verge of death. I talked with her mother who told me that in desperation she had sold the only canister of cooking gas she had, so she could pay for the day’s journey to the hospital to get help for her daughter. Well I hate to tell you but an hour and a half ago she died.

What about all the other families going through this hell. That have sold – WHAT? – only to be denied care when they arrived because of the lack of beds.

And now, to add to all their misery, the innocent people of Yemen have to deal with a fuel blockade. For example, most hospitals only have electricity in their intensive care units because fuel reserves are so low. I know this firsthand because I walked in the hospital and the lights were off. Electricity was off.

The people of Yemen deserve our help. That blockade must be lifted, as a humanitarian act. Otherwise, millions more will spiral into crisis.

And bottom line on Yemen, we need money and lots of it. And, above all, the war needs to end.

Madam President, sadly, many other nations bear similar scars from conflict and instability. During my visit to DRC last week, I met so many desperate families. It’s a cruel irony that this country remains one of the poorest on earth, despite its vast natural resources.

DRC’s history of conflict and displacement, combined with economic and political instability, and health crises such as Ebola, have fueled surging food insecurity.

At WFP’s our food is providing a lifeline to many of these people, preventing them from being overwhelmed by starvation and famine. But we urgently need more funding to continue this work.

In February, I was in the Tigray region of Ethiopia, which has been convulsed by armed conflict in recent months. As you all know, from the humanitarian perspective, everyone has been gravely concerned about getting access to help those in need. I, along with other UN leaders, have visited Ethiopia several times since hostilities broke out, including last week, and just a few days ago, and after detailed extensive negotiations with the Government we have achieved some significant breakthroughs.

We have substantially improved access for humanitarian workers and cargo in the region, with UN agencies and NGOs being able to deliver more support to those in need. Also, the UN now has satellite dishes working: two new ones were approved for IOM yesterday and will be available for NGOs to use in Shire and Mekelle. I am hopeful that in the next day or so, humanitarians will have additional approval for much needed satellite phones and communications equipment.

But the real work is only just beginning. We believe that 3 million people or more in the Tigray region require food assistance, so we have a great deal more to do. But we can’t get on with it, unless we receive the funding urgently needed.

ragically, the list of countries in need, the casualties of conflict, just goes on and on.

Madam President, finally I want to highlight the continuing crisis in South Sudan, where 7.2 million people face acute levels of food insecurity or worse. In early February, I visited western Pibor, but in recent days I have heard heart-rendering stories about the plight of people living in the area.

In Western Pibor, in extreme circumstances, mothers are resorting to feeding their children with the skin of dead animals – or even mud. Can you imagine.

This is a desperate situation that calls for urgent attention. Famine-like conditions have been identified in Western Pibor. The local population call 2021 “the year of starvation”. And their suffering is the result of widespread conflict and the unprecedented floods that came in 2019 and 2020. These people are in the crossfire of conflict while bearing the brunt of the climate crisis. Just like vulnerable communities all around the world.

So when we ask Security Council Members to provide $5.5 billion, immediately, to avoid multiple famines around the world – I urge you to open your hearts, show compassion, and to give and to give generously. Together, we will use these funds to provide emergency assistance, to save millions of lives, protect the livelihoods of the world’s poorest communities.

But we need all of us to work together. We’ve got a lot of work to do.

Beyond the immediate crisis, we also need to invest in peace, so that in the future, desperate families are not forced to the brink of survival by the bullet and the bomb.

The costs of this violence are immense: just in 2019 $14.5 trillion a year – 15 percent of global GDP. It would take a fraction of this money to fund the development programmes that could transform the lives of people in fragile, conflict-scarred nations – and help lay new pathways to peace.

The Security Council has a moral obligation to do everything in your power to end these wars. But until we can achieve that, we need you to give us the funds to stop millions of people from dying from starvation. We were able to avert famine in 2020, we can do it again.

Please, don’t ask us to choose which starving child lives, and which one dies. Let’s feed them all.