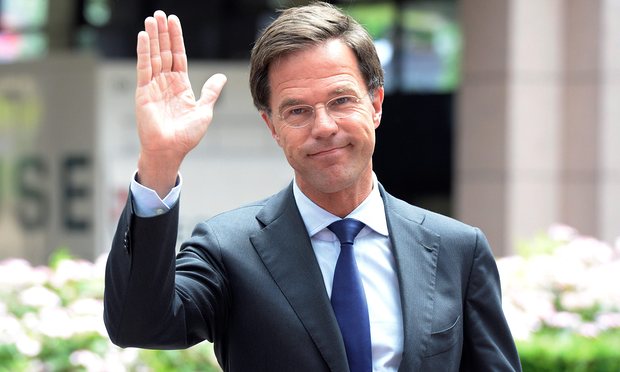 The Dutch prime minister, Mark Rutte, has published an open letter to the country’s citizens ahead of elections in March, telling anyone who cannot respect its customs to leave.
People who “refuse to adapt, and criticise our values” should “behave normally, or go away”, Rutte said in a full-page newspaper message seen as a bid to win over voters drawn to Geert Wilders’ anti-immigration, anti-Muslim Freedom (PVV) party.
He said the Dutch were “increasingly uncomfortable” with those who abused the freedoms they enjoyed after coming to the Netherlands, who “harass gays, or whistle at women in short skirts, or brand ordinary Dutch people racists”.
Rutte, whose liberal VVD party narrowly trails PVV in the polls with elections less than two months away, said he shared the feelings of those who thought: “If you so fundamentally reject this country, then I’d prefer it if you leave.”
He said the solution was “not to tar everyone with the same brush, or insult or expel whole groups” but to “make it crystal clear what is normal, and what is not normal, in our country. We must actively defend our values.”
The message did not mention PVV by name, but Wilders struck back on Monday, calling Rutte “the man of open borders, of the asylum tsunami, of mass immigration, Islamisation, lies and deception”.
Seeking a third term in government, Rutte is credited with leading the Netherlands to recovery from the 2008 financial crisis, but has seen his popularity slide and was accused by a centre-right rival last week of presiding over a “moral crisis”.
Source: https://www.theguardian.com/world/2017/jan/23/netherlands-pm-mark-rutte-…