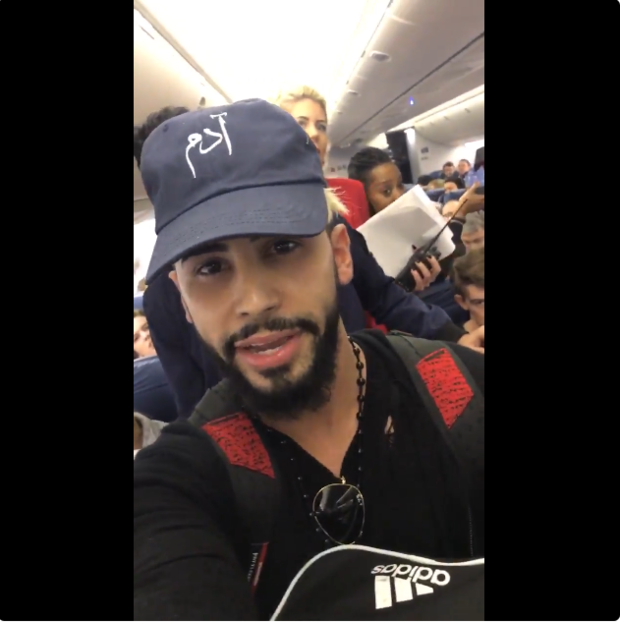 Adam Saleh, an American YouTube personality, has published a video which he claims shows him being kicked off a Delta Air Lines plane after he says he had been heard speaking Arabic on the phone to his mother.
Saleh, who said he was travelling home to New York, did not say where the incident occurred but subsequent footage that he broadcast on Periscope showed him to be at London’s Heathrow Airport Terminal Three, from where Delta flights to New York depart.
The Delta Air Line flight DL001 scheduled for a 10.10am depart for New York was delayed by over an hour, departing at 11:36am.
The YouTube personality has a large following with over 2.2 million subscribers on his online channel.
As Saleh explains the situation on camera, Delta airline staff can be seen standing closely behind him.
At one point, other passengers on the plane can be seen waving him off as they shout “bye.”
The video was retweeted more than 154,000 times and liked by 95,000 followers.
After the incident, Saleh’s Twitter followers quickly jumped by thousands in a couple of hours, reaching over 250,000. He also has over 2.2 million subscribers in Youtube.
Delta Air Line has released a statement on the incident stating, ‘Two customers were removed from this flight and later rebooked after a disturbance in the cabin resulted in more than 20 customers expressing their discomfort.’
‘We’re conducting a full review to understand what transpired. We are taking allegations of discrimination very seriously; our culture requires treating others with respect.’
This is not the first time that Delta Air Line has been accused of Islamophobic incidents abroad their planes.
In August of this year, Muslim couple, Faisal Ali and Nazia Ali, claimed they were singled out after flight crew noticed them ‘sweating’ and saying the word ‘Allah’ on a flight from Paris to Cincinnati, Ohio.
Flight attendants denied these accusations and Delta Air Line spokesman, Morgan Durrant, responded, ‘Delta condemns discrimination toward our customers in regards to age, race, nationality, religion, sexual orientation or gender.’
The hashtag #BoycottDelta is now trending worldwide in reaction to the video.