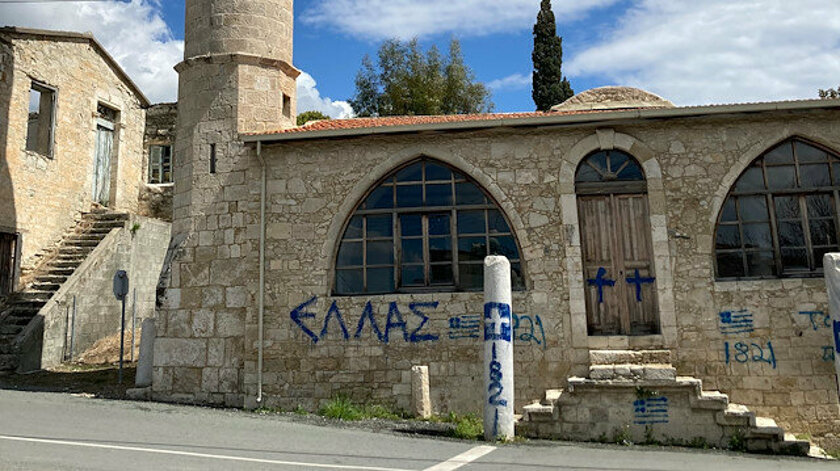 The Turkish Republic of Northern Cyprus (TRNC) on Thursday condemned an attack on a mosque in Limassol province in the Greek Cypriot Administration’s area.

According to Turkish News Agency-Cyprus (TAK), unidentified individuals wrote slogans praising the Greek uprising on its anniversary of March 25, 1821 along with the Greek flag and a cross drawn on the walls and doors of the mosque in the village of Episkopi (Piskobu-Yalova) in Limassol.

President Ersin Tatar said that Greek provocations were raised before the negotiation process on the Cyprus issue today just as in the past, according to a statement from the press and public relations department of the TRNC presidency.

While there are only a few days left before the informal 5+1 meeting led by the UN on the Cyprus issue will be held on April 27-29 in Geneva, Switzerland, Tatar emphasized that Greek provocations have intensified.

He said all mosques and sacred places located in the Greek side are being attacked, like yesterday’s attack on the mosque in Limassol province, recalling that the attackers wrote “All Turks shall die” along with other “racist and fascist” slogans and drawings of Greek flags on the walls of the mosque.

Tatar mentioned that the “Greek Cypriot mentality was once again demonstrated by this event,” saying “it is also worth recalling that during the period of 1963-1974, hundreds of our mosques were attacked and destroyed.”

“Our advice to the Greek Cypriot Administration and its leadership is that it should not organize and support such racist and fascist attacks, prevent them and arrest those responsible as soon as possible,” he added.

Meanwhile, Turkish Cypriot Prime Minister Ersan Saner also condemned the attack and the “racist attitude” being demonstrated by the incident.

Saner stressed that the Greek Cypriot Administration should locate the perpetrators of the incident and bring them to justice, saying what was done was a provocation and could not be accepted.

Noting that the criminals should not go unpunished, he reminded that the perpetrators of various attacks on mosques and racist attacks against Turkish Cypriots who passed to Southern Cyprus were not found and all attacks went unpunished.​​​​​​​

“Is the Greek government so helpless? It cannot find the perpetrators of such attacks and bring them to justice. We expect the criminals to be found and punished,” he added, inviting the Greek Cypriot Administration to take a deterrent stance against the attacks.