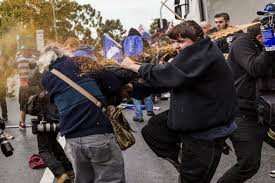 An Israeli court sentenced a Palestinian U.N. worker to seven months in jail on Wednesday for aiding the militant group Hamas in the Gaza Strip, the United Nations agency that employed him said.
Wahid Abdallah al Bursh was detained in July and said by Israel’s Shin Bet security agency to have confessed to being recruited by the Islamist group in 2014.
Under the terms of a plea deal, Bursh is expected to be released next week, the United Nations Development Programme (UNDP) said.
A Shin Bet statement in August said Bursh had provided assistance in the building of a maritime jetty for Gaza’s dominant Islamist group “using UNDP resources”.
It also said Bursh had persuaded his UNDP superiors to prioritize the neighborhoods of Hamas operatives when earmarking money for reconstruction in Gaza, which was devastated by a 2014 war with Israel.
The aid organization said in a statement on Wednesday that the court’s decision “confirms that there was no wrongdoing by UNDP.”
“UNDP has zero tolerance for wrongdoing in its programs and is committed to the highest standards of transparency and accountability,” it added.
Shortly before Bursh’s detention, Israel also indicted a senior Palestinian staffer with the U.S.-based charity World Vision on charges of funnelling millions of dollars to Hamas in Gaza.
A foreign ministry spokesman said the trial of Mohammed El Halabi was still ongoing.
Hamas had denied any links with Bursh and rejected the charges against Halabi.
Hamas has observed a de facto ceasefire with Israel since 2014, when 2,100 Palestinians and 73 Israelis were killed in a war but Israel blames the group responsible for all rockets launched from the territory.
Source: http://www.reuters.com/article/us-israel-palestinians-gaza-idUSKBN14O26Z…