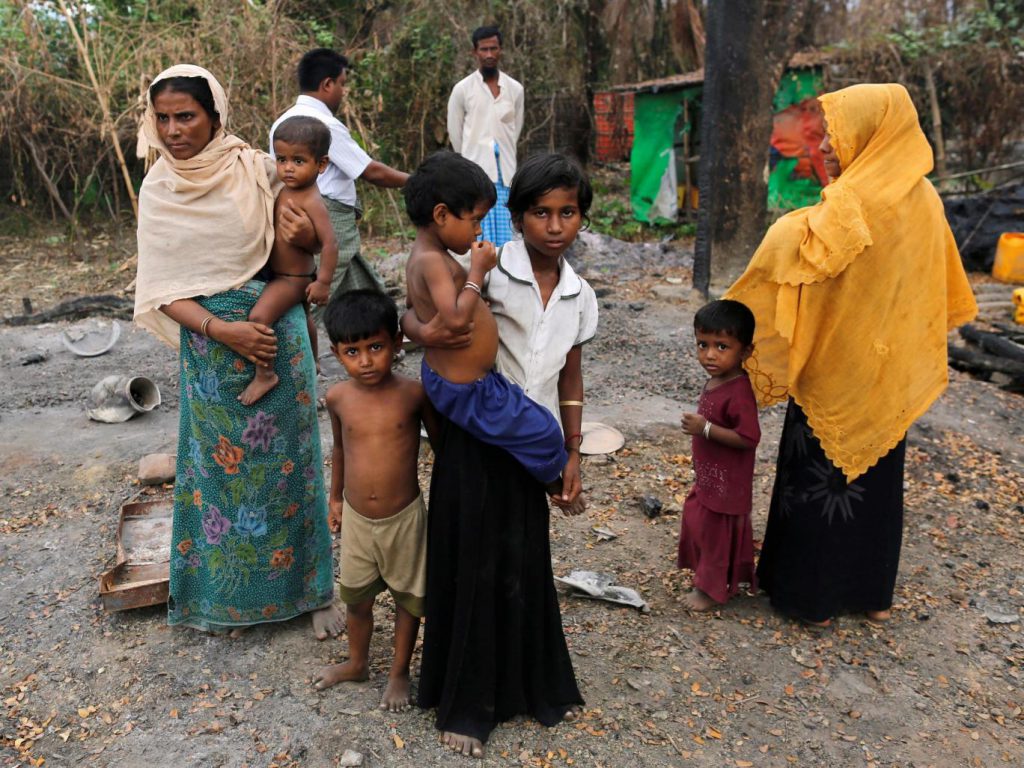 Images have emerged of the body of a baby boy, reported to be a Rohingya Muslim child who drowned while fleeing violence in Burma’s Rakhine state.
Non-state media are banned from entering the north of Burma – making it difficult to verify the the photograph – and the government has dismissed the image as “propaganda”.
Despite documented evidence by human rights organisations, Burmese authorities on Wednesday released a report denying allegations of human rights violations against the country’s Rohingya minority and warning readers against believing “fabricated news and rumours”.
Critics have drawn parallels between the photograph of the toddler and that of drowned Syrian refugee Alan Kurdi, whose death in 2015 prompted an outpouring of outrage and sympathy from the international community.
The baby in the recent photograph is purported to be Mohammed Shohayet, a 16-month-old who attempted to flee to Bangladesh to escape Burma’s military, with soldiers allegedly searching for and shooting Rohingyas.
“When I see the picture, I feel like I would rather die,” Zafor Alam, who claimed to be Mohammed’s father, told CNN.
“There is no point in me living in this world.”
Mr Alam told the broadcaster Burmese soldiers had opened fire on his family in the Rakhine region, and his village had been razed to the ground. He said his grandparents had been burned to death.
His account aligns with satellite imagery from the state, which has previously revealed hundreds of buildings across multiple villages in the northern state have been burned to the ground.
But Burmese government officials deny that they are responsible for the attacks on the district, and have alleged that the Rohingya are burning down their own houses.
In response to the destruction of their homes, many Rohingya make the hazardous journey to Bangladesh, and thousands are thought to have drowned at sea or in rivers.
Mr Alam said his son had died after too many refugees boarded the boat he was travelling on across the Naf river to Bangladesh, causing it to sink.
The image of Mohammed, reportedly captured with a camera on a mobile phone after he drowned, comes as state-media have warned that fake news images are being shared by the Rohingya press.
Yet the government has been accused of attempting to discredit real reporting by making fake news claims.
In Facebook posts, the government has shared images of atrocities in other countries, or even from Hollywood films, and claimed they are being passed off as images of brutality against the Rohingya.
The recent surge in violence was triggered by the killings of nine police officers at border posts on 9 October in Rakhine.
Several government officials blamed a militant Rohingya group for the attacks, which prompted security forces to launch a counter-insurgency operation.
Rohingya women in the Rakhine state have in recent months alleged that Burmese soldiers raped and sexually assaulted them at gunpoint.
In November, a senior UN official John McKissick said the security forces were striving towards the “ultimate goal of ethnic cleansing of the Muslim minority in Myanmar”.
There has been disappointment that Nobel laureate Aung San Suu Kyi, whose party took power this year from the military, has failed to ease or even acknowledge the suffering of the Rohingya.
Source: http://www.independent.co.uk/news/world/asia/burma-government-aung-san-s…