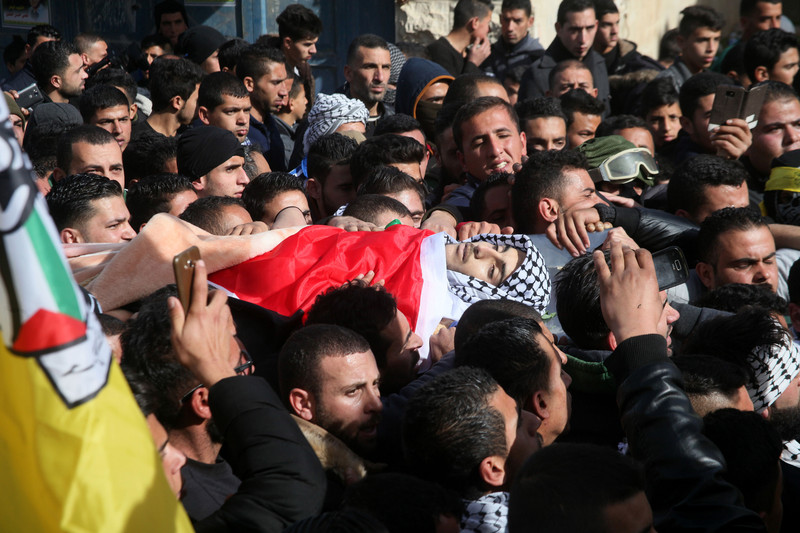 The footage shows a man standing next to a concrete barrier, several feet away from any Israeli soldiers.
The man stands in place for several seconds, and remains standing as a group of soldiers shout at him to stop and sit on the ground and a first shot is fired. He then walks towards the soldiers who are firing near his feet before he eventually collapses, apparently shot in the upper body, as he comes closer to the soldiers at a faster pace.
The Israeli army claimed that the man, identified by Palestinian sources as Nidal Daoud Mahdawi, 44, attempted to stab soldiers.
No Israelis were injured during the incident.
Mahdawi reportedly held Israeli residency and was a married father of five.
The fatal shooting of Mahdawi came one day after Israeli forces were shown on video dragging an injured Palestinian teenager who would later be declared dead.
That incident occurred during confrontations near the Bethlehem-area village of Tuqu in the West Bank.
The slain youth was identified as Qusay al-Amour, 17.
Footage of the incident shows al-Amour lying motionless on the ground in a grove of trees as a group of soldiers run towards him, flipping him over before dragging him by the arms and legs to an army jeep several meters away, his head repeatedly hitting the ground.
The video shows Israeli soldiers firing crowd-dispersing weapons at Palestinians who had tried to approach the youth. Soldiers are then seen examining al-Amour before he is placed onto a stretcher.
“According to the Palestinian Red Crescent, al-Amour was hit by four bullets in his upper body and two in the legs. Four other Palestinians were wounded in the incident, including al-Amour’s sister,” the Tel Aviv newspaper Haaretz reported.
Source: https://electronicintifada.net/blogs/maureen-clare-murphy/video-israeli-…