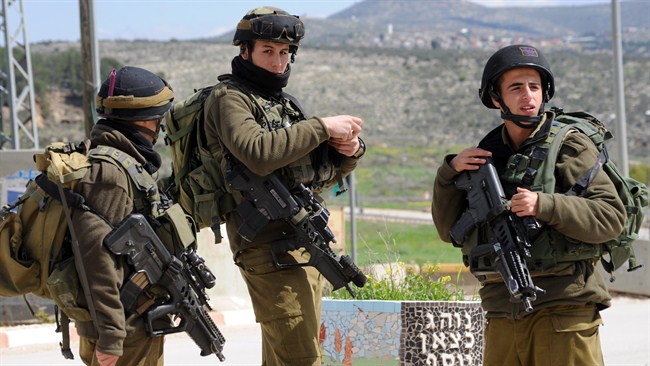 In 2012, Israeli soldiers attacked a group of foreign and Palestinian journalists, beating them with clubs before detaining them.
It has taken the Israeli army three years to conduct disciplinary proceedings against the commanding officers who gave the orders.
Footage from the incident, which took place in the occupied West Bank village of Kufr Qaddum, shows a crew of five journalists wearing gas masks, helmets, and vests marked as “PRESS,” as they walk down an empty street.
The journalists had been covering the village’s weekly demonstration against being cut off from their land.
Two Israeli military jeeps speed up the road towards the journalists, who move to the side of the road. Soldiers then exit the vehicles, stop the journalists and begin grabbing their equipment and hitting their bodies with clubs.
At least two of the journalists appear to be detained, while another is forced to the ground as he screams in agony.
One of the injured journalists in the ambush was Jaafer Ashtiyeh, a photographer with the AFP news agency.
Ashtiyeh was only informed last month that the commanding officer and the battalion commander were disciplined over a year ago, after three years of the investigation languishing.
According to the Tel Aviv newspaper Haaretz, the military police immediately opened an investigation at the time of the incident but it was left dormant until 2014, when Ashtiyeh filed a civil suit against the Israeli government.
Israel’s military investigations are notoriously ineffective.
Earlier this year, B’Tselem stopped cooperating with them, stating “We will no longer aid a system that whitewashes investigations and serves as a fig leaf for the occupation.”
Of the 739 cases of alleged abuse of Palestinians since 2000 that B’Tselem has demanded the army investigate, only 25 ever resulted in disciplinary action.
B’Tselem says that a quarter of the complaints never prompted an investigation at all.
The military police only began to complete its investigation into the assault on journalists in Kufr Qaddum after Ashtiyeh’s lawsuit was filed.
A year later, in August 2015, former Military Advocate General Danny Efroni recommended that disciplinary proceedings against the commanding officers begin.
According to Haaretz, the military found the company commander had ordered the use of excessive force. After he was reprimanded, the commander left the army. Haaretz does not indicate that he was asked to resign.
In fact, Haaretz reports that the army deliberately chose to enact low-level disciplinary proceedings out of consideration for an unrelated personal tragedy in the commander’s life.
The battalion commander was reprimanded for negligence for not sufficiently training soldiers on how to use clubs.
“It was found … that while preparing for violent disturbances of the peace, and while intending to limit the use of potentially lethal means, it was decided to equip some of the members of the [Israeli army] force with clubs,” the military said in a statement to Haaretz.
“Still, in carrying out arrests, the soldiers used force that exceeded what was necessary.”
None of the soldiers who beat the journalists were disciplined or charged, on the grounds that they were following orders.
Ashtiyeh’s civil suit ended in a settlement that includes monetary compensation.
Human rights groups have documented habitual physical attacks by Israeli forces against Palestinian journalists.
Earlier this month, the Committee to Protect Journalists revealed that Israel remains one of the world’s worst jailers of reporters, all of whom are Palestinians.