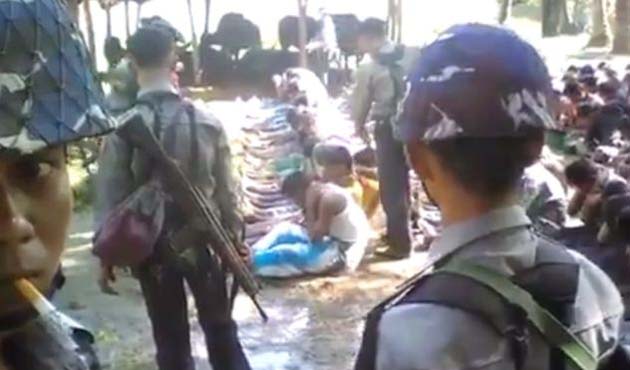 Myanmar is to investigate police officers who were filmed beating Rohingya villagers, an unusual admission that security forces may have carried out abuses against the Muslim minority.
The office of Aung San Suu Kyi, the country’s de facto leader, said action would be taken after the a user called Rohingya Blogger posted the video on YouTube over the weekend.
Filmed by a policeman smoking a cigarette, it shows his colleagues kicking two men sat on the ground and using as baton on them, while dozens of other male villagers sit alongside with their heads down.
The Rohingya are a minority of about a million people who, despite living in the country for generations, are treated as illegal immigrants and denied citizenship. The government and nationalist Buddhists have persecuted them for years.
The Guardian has been unable to authenticate the video, because it was purportedly shot in Rakhine state, where the government is conducting an intense military operation and has blocked access for aid workers and journalists.
Myanmar says it is responding to several Rohingya militant attacks that killed nine police officers on 9 October.
The state counsellor’s office, run by Aung San Suu Kyi, said the footage was filmed on 5 November during a “clearance operation” in Kotankauk village.
The state-run newspaper, the Global New Light of Myanmar, cited the police as saying the operation was launched in response to an attack by motorbike gunmen against police in which a lance corporal died.
It said the police were acting on tipoff that militants were being sheltered in the village and that a man living there had distributed “placards containing fake information” used during a protest when foreign diplomats visited the area.
The government had organised a trip for ambassadors to the area after embassies requested access. Rohingya rights activists say residents were ordered not to complain.
The recent bloodshed is the most deadly since hundreds of Rohingya were killed in clashes in 2012 and more than 100,000 were forced into squalid camps. A further 50,000 have fled to Bangladesh since October.
Last week, more than a dozen fellow Nobel laureates criticised Aung San Suu Kyifor the crackdown, warning of a tragedy that amounted to ethnic cleansing and crimes against humanity.
The army and officials have always alleged they are following the law, despite satellite images of burned villages and numerous reports of rape, indiscriminate killings and attacks on civilians.