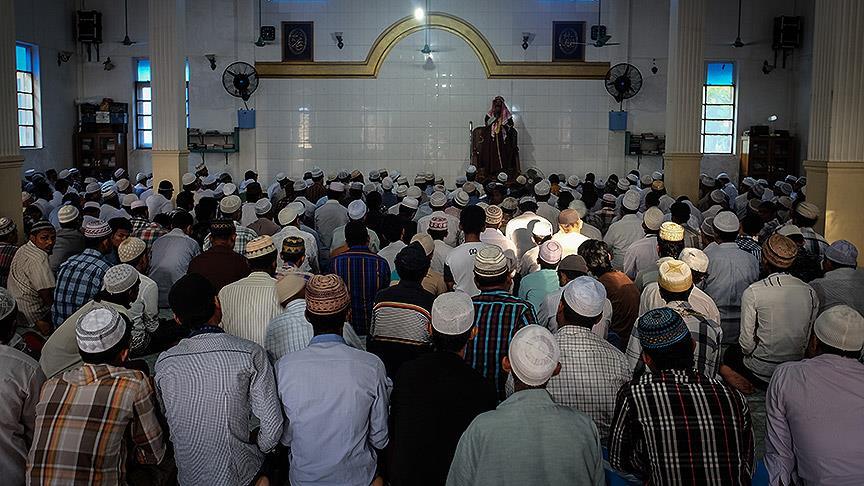 A Muslim gathering in a small Myanmar town has been canceled due to a protest from a Buddhist nationalist group — the second such disturbance in the country this month.
The event due to be held in the town of Pyay in Bago region, around 440 kilometers northwest of Myanmar’s former capital Yangon, was canceled last minute after a Yangon-based nationalist group pressured local authorities and Muslim residents, the Irrawaddy online magazine reported.
The report said authorities had permitted the ceremony — scheduled to be held for at least three hours Sunday — to last 30 minutes after negotiations Saturday with the nationalist group and Muslim residents.
The hardline Buddhist nationalists, however, later demanded that the ceremony be called off entirely.
“We have had the ceremony every year peacefully,” Kyaw Naing, a member of the festival organizing committee, was quoted by the magazine as saying.
He underlined that the Muslim community agreed to cancel their ceremony over the protest to demonstrate that Islam is a religion of peace for the people of Myanmar as well as across the world.
“Authority actually already granted permission to us for the ceremony,” he said.
The incident marked the second time this month that Buddhist hardliners impeded a Muslim gathering.
On Jan. 8, a crowd including hardline Buddhist monks — who many blame for a rise in persecution of Muslims in Myanmar — disturbed a religious service in Yangon’s Botataung Township, accusing the worshipers of holding it without the approval of local authorities.
Security personnel had to be deployed to guard the gathering, and Muslim residents later complained that some nationalists had behaved badly as they tried to pray.
Hardline nationalist monks — such as the Organization for the Protection of Race and Religion (Ma Ba Tha) — rose to prominence in Myanmar on the back of communal violence between Rakhine Buddhists and Rohingya Muslims in western Rakhine State in mid-2012.
Anti-Muslim rhetoric from the group has been seen as deliberately stoking the flames of religious hatred in the predominantly Buddhist country.
Source: http://aa.com.tr/en/asia-pacific/myanmar-nationalists-block-another-musl…