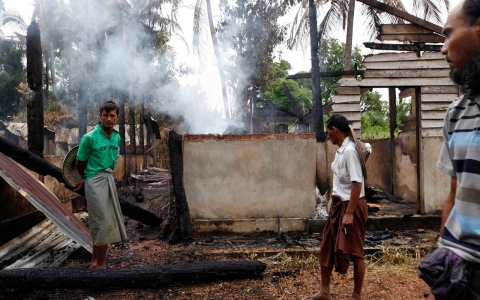 Sexual violence has become an effective tool of oppression for the Myanmar security forces who continue to raid villages in the country’s Rakhine state in search of insurgents, allege locals and the Rohingyas who have taken refuge in Bangladesh.
This correspondent spoke with several Rohingya women who claimed to have been picked up by the military and taken to camps. The victims, new arrivals at the refugee camps in Cox’s Bazar, said the military gang-raped them for days.
“I escaped a military camp where I was detained and repeatedly raped by army men,” said an 18-year-old Rohingya woman now staying at Kutupalong registered camp in Ukhiya upazila. The victim, from Kularbill village close to Maungdaw town, said she was abducted by the army who killed her parents in front of her.
“They took me to their camp because they found me attractive. In exchange for my life, they gang-raped me every day,” she said. She tried to escape after three days, but was caught by the camp guards. “Then they tied me up to a fence and raped me again.”
She could not say how long she was held in the camp. “I escaped again and went to the border. A middleman saw my bloodied state and took mercy on me. He brought me here for free.” She was referring to boatmen who ferry the fleeing Rohingyas from Myanmar to Bangladesh on Naf River for money.
Another victim, a 20-year-old from Hatipara village in Maungdaw, tried to explain the sheer horror of being violated in such a brutal way.
“You do not know how humiliating it is to be subjected to such violence,” she said. “Sometimes three or four army men raped us for hours.” She was in the same camp as the 18-year-old, she told the Dhaka Tribune.
Their stories are similar to the accounts of 23 other Rohingya women this correspondent spoke with at Kutupalong registered camp. So are the stories coming from other refugee camps – both registered and unregistered – in Teknaf and Ukhiya upazilas.
“These days, the military is searching houses for young Rohingya women,” claimed Abul Hasan (not his real name), resident of Baluhali village in Maungdaw. “When they find young Rohingya women in a house, they do not attack the men. They just take the women to their camps,” he said. He claimed many families were sending their young females away to Bangladesh to save them from the military.
Among the most affected villages in Maungdaw are Wah Paik, Hawarbill, Bur Gow Zi Bill, Surow Gow Zi Bill, Kularbill, Lu Daing, Hatipara, Bura Shiddar para and Nasa Furu. The Dhaka Tribune has not been able to independently verify any of the allegations.
Meanwhile, the Myanmar government continues to refute these allegations, saying they have not found evidence of such assaults and killings.
Source: http://www.dhakatribune.com/world/south-asia/2017/01/13/survivors-claim-…