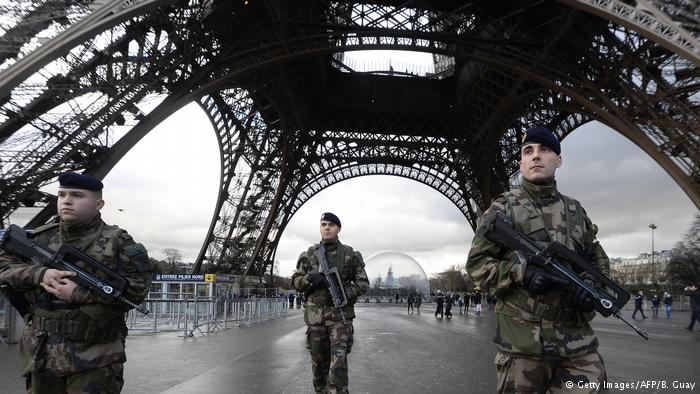 An Amnesty International report has highlighted expanded surveillance powers and search and detention laws as eroding basic freedoms. Ethnic and religious minorities in particular face discrimination.
The human rights organization Amnesty International released a report Tuesday morning detailing the “draconian powers” many European nations have put in place as part of their efforts to combat terrorism. Entitled “Dangerously disproportionate: the ever-expanding national security state in Europe,” the 70-page report argued that a security state is becoming “the new normal” across the 14 EU members states examined. In a statement accompanying the report’s release, John Dalhuisen, Amnesty International’s Europe Director, warned that counter-terrorism efforts are undermining Europe’s post-World War II consensus on human rights.
“In the wake of a series of appalling attacks, from Paris to Berlin, governments have rushed through a raft of disproportionate and discriminatory laws,” Dalhuisen said. “Taken alone these individual counter-terrorism measures are worrying enough, but when seen together, a disturbing picture emerges in which unchecked powers are trampling freedoms that have long been taken for granted.”
“We are in danger of creating societies in which liberty becomes the exception and fear the rule,” he added.
The topics Amnesty called out as concerning included increased surveillance, restricted freedom of expression, limitations to freedom of movement, the right to conduct warrantless searches, and the ability for governments to access mass amounts of their citizens’ data. The report also concluded that many countries have made it easier to declare states of emergencies. France has renewed its state of emergency five times since November 2015, when terrorists killed 130 individuals in coordinated attacks across Paris.
The crack-down measures disproportionately affected minorities, refugees and foreigners, the report found, causing isolation and fear among these groups.
Julia Hall, a counter-terrorism expert and author of the report, told Reuters that “we see Muslims and foreigners being equated with terrorists.”
Hall described how governments profile individuals based on stereotypes: “governments [are] looking at a person and saying: ‘You look very suspicious to me. So I’m going to restrict your behavior because I think you might commit a crime.'”
The report also pointed out that such restrictive laws can cause people to preemptively self-censor their expression out of fear of being interpreted as a security threat.
Source: http://www.dw.com/en/european-counter-terrorism-legislation-dangerously-…