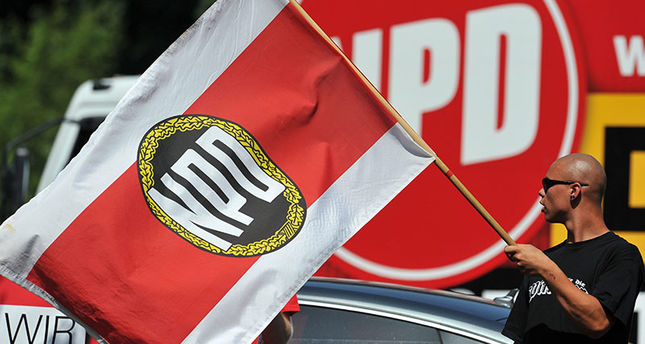 Germany’s supreme court ruled against lawmakers’ bid to outlaw a far-right party accused of promoting a racist and anti-Semitic agenda on Tuesday.
The German parliament’s upper house, which represents the country’s 16 state governments, applied for the ban at the end of 2013. It’s the second attempt to ban the National Democratic Party, better known by its German acronym NPD.
Officials maintain the party violates the German Constitution and are keen to cut off NPD’s state funding, to which all political parties are entitled.
Only two parties have been outlawed in West Germany and reunited Germany — the neo-Nazi Socialist Reich Party in 1952 and the German Communist Party in 1956.
The constitution states: “Parties that, by reason of their aims or the behavior of their adherents, seek to undermine or abolish the free democratic basic order or to endanger the existence of the Federal Republic of Germany shall be unconstitutional.”
There are questions, however, about how politically relevant the NPD remains.
It has a single seat in the European Parliament, but isn’t represented in the German Bundestag after winning just 1.3 percent of the vote in the last national election in 2013. Parties need to meet a 5 percent threshold to hold seats in the federal parliament.
Founded in 1964 as a successor to the neo-fascist German Reich Party, the NPD calls for “the survival and continued existence of the German people in its ancestral central European living space” — or simply, “Germany for the Germans”.
Such language flirts with the turns of phrase used under the Nazi Third Reich.
Germany’s domestic intelligence services classify the ultra-nationalist NPD with its 5,200 members as a far-right party.
A previous attempt to ban the NPD failed because the presence of undercover state informants within party ranks was seen as sullying the evidence.
While those informants have since been “deactivated,” the judges have voiced doubts over the danger the NPD poses to the democratic order.
Regardless of the verdict handed down Tuesday, “the Federal Constitutional Court will not take the confrontation with right-wing extremism off our hands,” Justice Minister Heiko Maas told the daily Die Welt. “Even if the NPD were banned, that unfortunately does not mean there are no right-wing extremists in Germany.”
Source: http://www.dailysabah.com/europe/2017/01/17/top-german-court-to-rule-on-…