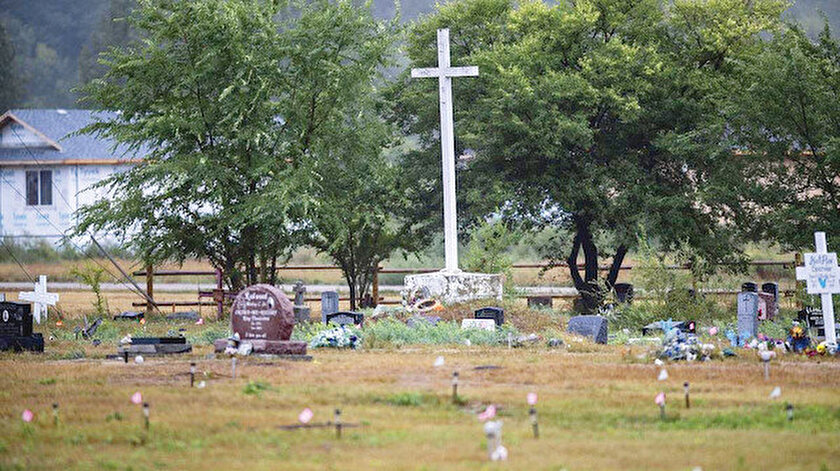 A Saskatchewan First Nation has located 14 possible burials on the grounds of a former Anglican-run residential school, the 10th community to make such an announcement since last May.

On Wednesday, community leaders said that a ground-penetrating radar company had searched four sites around the former Gordon’s Indian Residential School and found 14 subterranean anomalies that are likely burials.

“It is my hope that one day we will be able to tell our children the whole story,” Chief Byron Bitternose told a news conference.

No further technical details were provided concerning the size, depth or shape of the anomalies. None of the suspected burials were located on or near known cemeteries.

The search began in the fall and, according to Sarah Longman, a George Gordon member overseeing the search, will take years complete.

“This is probably going to be at least a 10-year journey,” she said. “We’re dealing with more than 100 years of history. There’s a lot of work and area to cover to find what we’re looking for.”

If human remains are recovered, they may never be identified, she said, owing to technological and archival limitations. Though the community has been in constant dialogue with the Anglican Church, Ms. Longman said it has yet to receive all the school records it needs.

Anglican Church of Canada spokesman Joseph Vesci said in an e-mail that all residential school records were submitted to the Truth and Reconciliation Commission and are available online.

“We know there are sites at Anglican residential schools where some graves are unmarked or where records are incomplete,” Mr. Vesci said. “We are committed to working with Indigenous communities to assist to recover whatever information is available and to join in advocating for ground searches of those burial sites.”

George Gordon is one of dozens of First Nations that began searching residential school grounds last year after the B.C. First Nation of Tk’emlúps te Secwépemc announced it had discovered 215 unmarked and previously undocumented gravesites using ground-penetrating radar in May.

The figure was later revised to 200 “probable burials.”

The Tk’emlúps revelation initiated a period of reflection and mourning across the country. Flags on federal buildings were lowered to half-mast for five months. International media followed the story closely, including a lengthy segment on the CBS news program 60 Minutes, hosted by Anderson Cooper. Much of the scrutiny focused on the Catholic Church, which operated most of the country’s residential schools.

Different factions of the Anglican Church administered Gordon’s from when it opened in the 1880s to 1969, when it was taken over by the federal government, and eventually closed in 1996.