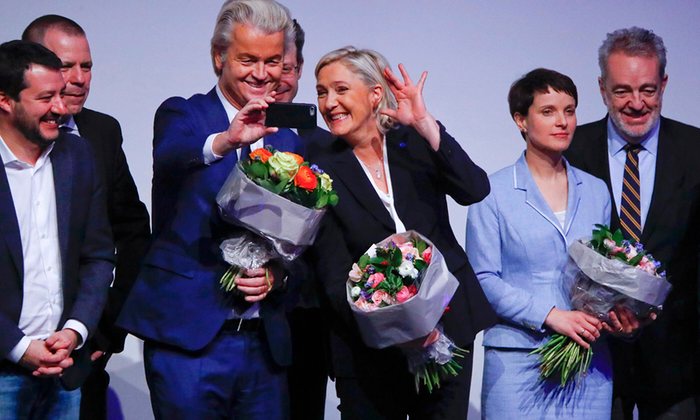 The political group Europe of Nations and Freedom (ENF), which consists of representatives of several populist and anti-immigration parties including Germany’s Alternative for Germany (AfD) and the French National Front, is holding a convention in the western German city of Koblenz on Saturday.
The ENF is the smallest group in the European Parliament, with 40 members. However, some 1,000 participants are expected at the meeting.
Prominent European populist politicians, including AfD co-leader Frauke Petry, the National Front’s leader and French presidential candidate Marine Le Pen and the Dutch lawmaker Geert Wilders, are attending, along with Matteo Salvini, who head Italy’s Northern League (LN).
Petry and Le Pen already met up on the eve of the convention in Mainz, some 98 kilometers southeast of Koblenz (61 miles), police said.
Last week, it emerged that a number of journalists have been banned from attending the convention, including representatives of some of Germany’s most respected news outlets. The AfD frequently alleges that it receives inadequate coverage in the media.
DW’s Kate Brady, however, is among the journalists to have received accreditation.
In her speech during what was her first public appearance in Germany, Le Pen said that “2016 was the year that the Anglo-Saxon world woke up,” adding that Britain’s vote last year to leave the European Union would have a “domino effect” across the bloc.
“I don’t say every country has to leave the euro … But we have to leave the possibility if a country wants to leave,” she added.
Le Pen, whom many analysts see as likely to be one of two presidential candidates in a May runoff vote in France, has adopted an anti-EU stance as a major element in her campaign.
Wilders, for his part, hailed the advent of Donald Trump onto the world stage as newly inaugurated US president, saying: “Yesterday a free America, today Koblenz, tomorrow a new Europe.”
Trump, who took office on Friday, has advocated a vehement “America first” nationalist stance.
The Dutch politician also scored with his audience by calling for Petry to become German chancellor instead of current leader Angela Merkel, whom populist parties regularly accuse of having harmed Europe and her country by allowing in hundreds of thousands of refugees and migrants, many of them fleeing conflict and poverty in their native countries.
Source: http://www.dw.com/en/leading-european-right-wing-populists-attend-koblen…