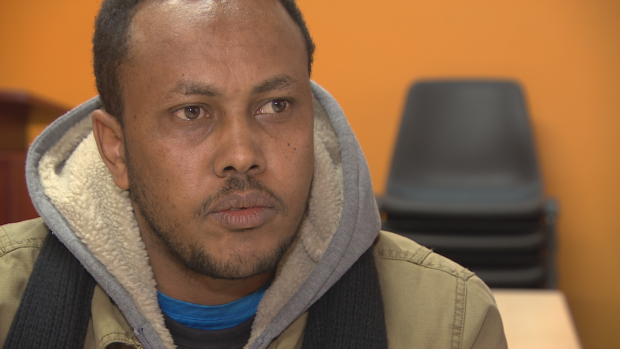 The temperature dipped below –20 C as a large group of refugees trudged through snowy Manitoba fields near the U.S. border Saturday.
Farhan Ahmed says he couldn’t feel his fingers or toes as he walked about 12 kilometres along a road.
“It was very, very cold and it was icy that night,” Ahmed said.
Over the weekend, RCMP said, 22 people crossed the border near Emerson, about 100 kilometres south of Winnipeg — 19 on Saturday and three on Sunday.
Ahmed and his group, including a family with children, finally called 911 for help. RCMP brought them to a Canada Border Services Agency location where they could make refugee claims.
“They gave us heat. If we didn’t get that, I couldn’t feel my hands. I couldn’t feel my hands. It was hard,” Ahmed said.
The number of asylum seekers crossing the Canada-U.S. border into Manitoba on foot instead of through official crossings has drastically increased in the last few months, said Rita Chahal, executive director of Manitoba Interfaith Immigration Council. “In January alone there were about 39, 40 files opened,” she said.
Ten files were opened last week and, with the recent group over the weekend, Chahal said there will be at least 20 more this week.
Since April 2016, the council has opened 270 files, with a large increase in the fall.
Source: http://www.cbc.ca/news/canada/manitoba/22-refugees-enter-manitoba-1.3969874