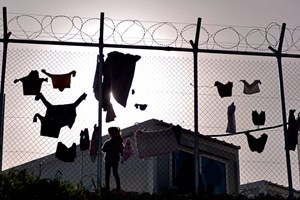 Greek authorities registered over 3,300 unaccompanied asylum-seeking and migrant children arriving in Greece in the first seven months of 2016. Many of these children had fled violence and armed conflict in their home countries, including Syria, Afghanistan, and Iraq. Others were escaping discrimination and crushing poverty.
Alone in Greece without parents or an adult responsible for their care, these children are entitled to care and protection from Greek authorities. However, Greece has a chronic shortage of suitable accommodation and lacks a comprehensive protection system for child asylum seekers and migrants. These factors have led to the prolonged arbitrary detention of children—often in poor and degrading conditions—in protective custody at police stations, in pre-removal detention centers, and in closed facilities on the Greek
Human Rights Watch found that unaccompanied children face routine, arbitrary detention. Under international law, binding European directives, and national law, detention of unaccompanied children can be used only as a measure of last resort, in exceptional circumstances, and for the shortest appropriate period.
However, children are being detained as a matter of course and for prolonged periods. Greek law allows the detention of unaccompanied children in protective custody while awaiting transfer to a shelter for 25 days, and for up to 45 days under very limited circumstances. Yet children are being detained for longer than these already lengthy periods. Records at one police station showed that the eight children held there had been in police custody for an average of one month, and that one child had been in detention for more than two months. At a pre-removal detention center in northeast Greece, five children said they had been detained for three months or more. Human Rights Watch interviewed nineteen children in police custody who had been detained in excess of 25 days pending transfer to a shelter, including nine who had been detained in excess of 45 days.