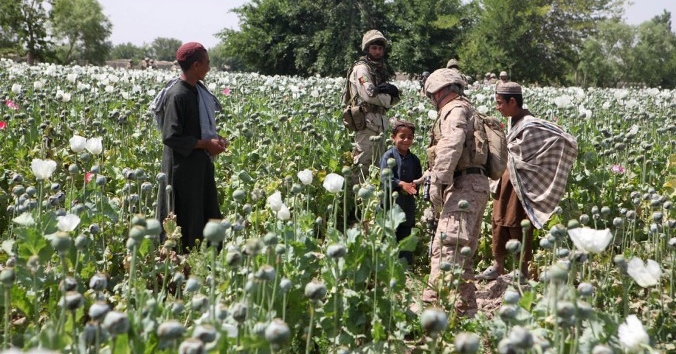 The U.S. is dealing with the most severe heroin epidemic the country has seen in years, but the public health crisis here is dwarfed by the severity of the problem in Afghanistan. And the billions of dollars the U.S. is spending to fight the epidemic in the central Asian nation seems to be having little effect.
The new quarterly report released by Special Inspector General for Afghanistan Reconstruction (SIGAR) found that more than 10 percent of people in Afghanistan have tested positive for one or more drugs, with heroin being the most popular. By comparison, 0.2 percent of individuals in the U.S. are dependent on heroin. Thirty-one percent of Afghani households and around nine percent of children also tested positive for one or more drugs.
While the addiction numbers are worrisome, the production numbers are even more alarming.
Afghanistan produces 90 percent of the world’s heroin, according to the May 2015 UN Office of Drugs and Crime report. As the dominant global producer of illegal heroin, the country cultivated a record 224,000 hectares (more than 550,000 acres) in 2014.
Afghanistan began to emerge as a key source of the drug in the 1980s, but in 2001 the Taliban severely restricted cultivation of the crop, deeming it un-Islamic.
Between 2002 and June 30, 2015, the U.S. spent $8.2 billion toward the effort. But those billions have had little impact due in part to rampant corruption in domestic law enforcement. Most of the U.S.-supplied funds go towards discouraging poppy cultivation in favor of legal crops and raising public awareness about the dangers of drug use. Media campaigns have proven largely unsuccessful.
Seizure data from 2011 and 2012 in the SIGAR report suggest that availability of Afghan heroin in the U.S. is increasing, with an estimated 4 percent of U.S. heroin coming from Afghanistan. (Mexico is the primary source of heroin in the U.S.). In Canada, Afghan opium accounts for 90 percent of the heroin sold on the streets.