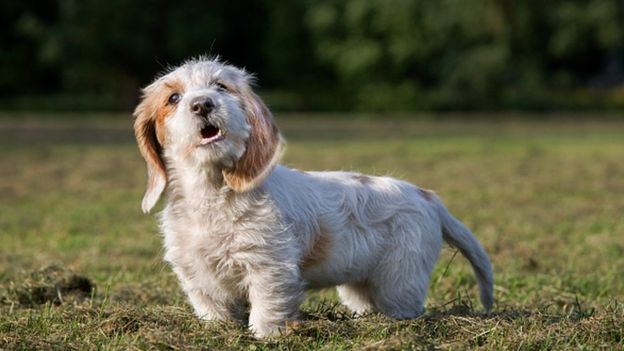 The mayor of a town in northern France has issued a ban on excessive dog barking in a bid to curb canine noise pollution.
From Monday, dog owners in Feuquières face a €68 (£60; $77) fine for “prolonged or repeated barking”.
Mayor Jean-Pierre Estienne says the ban is in response to dogs “barking day and night” and creating “an unbearable situation” in the village.
The decree has been criticised by animal rights activists.
“The aim is not to ban dogs and we won’t be fining people for the slightest hint of a yap,” Mr Estienne told French newspaper Le Parisien (in French).
“The town has nothing against dogs but when you decide to have them, you educate them.”
Passed by the local council earlier this month, the decree forbids dogs from being left in enclosed areas without owners being nearby to stop “prolonged or repeated barking”.
Yappy dogs must also be kept inside if their behaviour “disturbs the rest or relaxation” of Feuquières’ 1,400 residents.
Offenders (or more specifically, their owners) will receive a fine for each complaint made against them.,
The decree follows a petition by villagers against one particular resident.
“She has several dogs, some large,” said Mr Estienne. “We have made several attempts to establish a dialogue with her, to no avail.”
“If I took this decision, it is because we found no other way out. I couldn’t sit idly by,” he said.
The move has been condemned as “completely barking” by Stéphane Lamart, president of the Association for the Defence of Animal Rights.
“You may as well stop church bells ringing on Sunday morning,” Mr Lamart told Le Monde newspaper (in French).
“If dogs have mouths, it’s so they can bark.”
Mr Lamart said he intended to launch an appeal with the local court. “I’ve never seen a dog bark from morning to evening,” he said.
This is not the first time French authorities have tried to dampen doggy decibels.
In 2012, Sainte-Foy-la-Grande in southwest France passed a ban on any excessive dog barking that disturbed “public order”.
Source: BBC