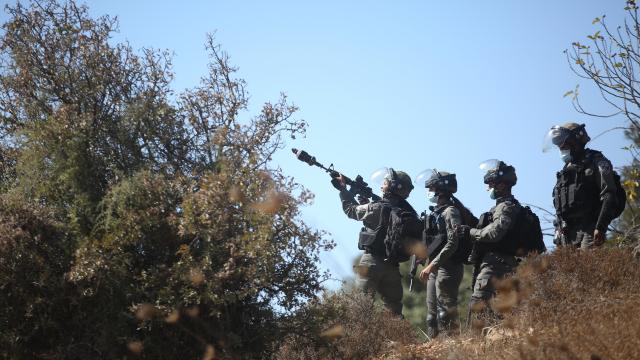 Israeli occupation forces uprooted dozens of olive trees on Palestinian-owned lands this morning in the village of Al-Jab’a in the southern West Bank city of Bethlehem, Wafa news agency reported.
According to the head of the Bethlehem office of the Anti-Wall and Settlement Commission, Hassan Breijieh, armed Israeli forces led bulldozers to Saf Khamayseh area, west of the village.
The destruction of Palestinian olive trees by Israeli soldiers and Jewish settlers has become routine in recent years.
Speaking to Wafa, the head of Al-Jab’a Village Council Dhiab Masha’le added: “They used heavy machines to raze hundreds of dunums of farmlands belonging to the Masha’le family and uproot dozens of olive trees.”
Located some 13 kilometres to the southwest of Bethlehem city, Al-Jab’a has a population of nearly 1,200 and occupies a total area of some 8,000 dunums (8 square kilometres), 92 per cent of which is considered arable land, and the remaining eight per cent is residential.
Palestinian olive oil producers based in the occupied West Bank have faced enormous difficulties as Israeli authorities have confiscated or denied access to land, uprooted ancient trees and controlled water resources.
Over 800,000 Palestinian olive trees have been uprooted by Israeli authorities and settlers since 1967, according to research from the Applied Research Institute of Jerusalem.
Source: MEM