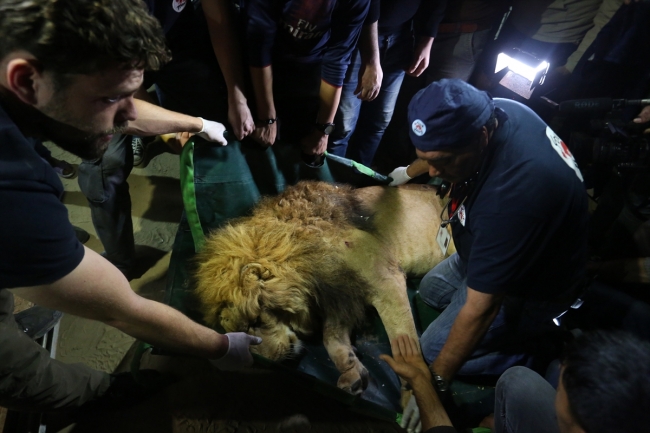 Nearly 50 animals have been transferred from the besieged Gaza Strip to Jordan and will be making their way to new homes around the world, the Palestinian Ministry of Agriculture said.
The Director of Information and Public Relations of the Ministry Fayez Al-Sheikh said the animals and birds have been moved from the Rafah Park in the southern Gaza Strip to the Highland Reserve in Jordan.
International animal rescue organisation Four Paws “transferred 47 zoo animals out of the Gaza Strip”.
“The animals – including five lions, a hyena, several monkeys, wolves, porcupines, foxes, cats, dogs, emus, ostriches and squirrels – come from a neglected zoo in Rafah in the south of Gaza,” Four Paws said on its website.
The rescue mission was due to take place at the end of March but was postponed following Israel’s brutal crackdown on peaceful Palestinian protesters in the besieged Gaza Strip and it’s bombing of the area.
“Four Paws brought most of the animals to Jordanian wildlife sanctuaries with two of the lions to fly on to South Africa today,” the organisation said.
“The intensive work of the last weeks has brought our team to its limits. To examine and load almost 50 animals in just a few days was a huge challenge. Thanks to the cooperation of all authorities, it was possible for us to bring the animals safely out of Gaza. From Israel to Palestine and Jordan, it was impressive to see how these three nations worked together for the animals from Rafah,”
says Four Paws veterinarian and Head of Mission Amir Khalil, who already evacuated two zoos in Gaza in 2014 and 2016.
The Four Paws team arrived in the Gaza Strip on 4 April and spent almost four days on site to conclude final negotiations, and prepare the logistics of the transfer.
Source: MEMO