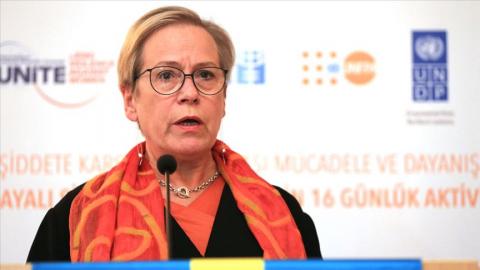 More than 5,700 hate crimes were reported last year in the Organization for Security and Co-operation in Europe (OSCE) region, a report said on Nov. 15.
The Office for Democratic Institutions and Human Rights (ODIHR) published its 2018 hate crime data, reporting 5,735 incidents.
“On the International Day for Tolerance, this is our contribution to support the important fight against intolerance and discrimination in the OSCE region,” it said.
ODIHR Director Ingibjorg Solrun Gisladottir urged countries to implement hate crime legislation that has existed in their law books for many years.
“We must be clear that bias-motivated crime is not a phenomenon that affects minority communities only, but on the contrary is a direct attack on our democracies and the human rights principles on which they are based,” Gisladottir said.
The report went on to say 2,763 anti-Semitic incidents were reported in 2018, followed by 1,825 racist and xenophobic incidents, and 838 reports of “bias against sexual orientation or gender identity”.
Forty-one states including Turkey submitted hate crime information to ODIHR in 2018.
According to the report, Muslims are often portrayed as a monolithic group and associated with terrorism and extremism.
Attacks against mosques are generally reported on Fridays and religious holidays, the report said, adding that mosques, community centers and Muslim families’ homes are also targeted as well as women wearing headscarves.
The vast majority of bias-motivated crimes go unreported as many victims do not go to the police because they doubt the authorities will take action, it added.
Source: Daily News