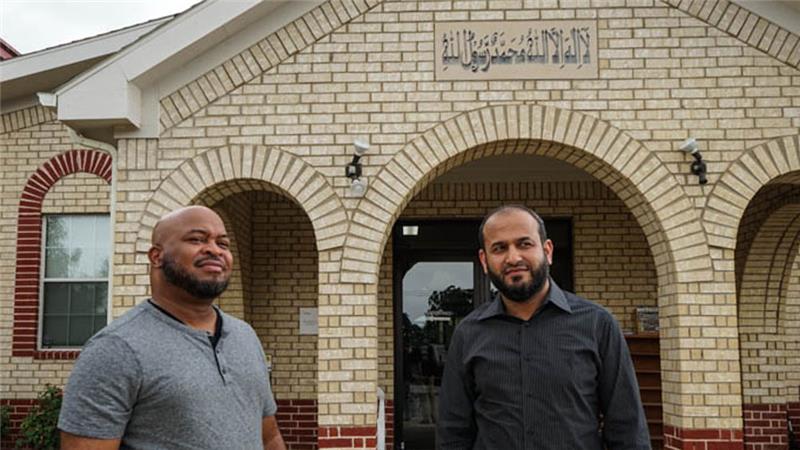 Vincent Simon recalls feeling shocked when he flipped on the Masjid Al Sahaabah mosque’s voicemail to hear a death threat from a man promising to behead Muslim worshippers.
Simon, a US military veteran who converted to Islam some five years ago, said that the small mosque and its attendees are threatened regularly, receiving three or four intimidating voicemails a week.
At a time when rights groups and analysts warn of growing violence against Muslims and of intense Islamophobic rhetoric among mainstream politicians, the threat of beheadings raised serious concerns.
“This wasn’t the normal threat,” said Simon, who is on the mosque’s board and security committee.
“This is a long, angry message with a definite ‘I’m going to cut your heads off’ kind of thing’,” said Simon.
Mujeeb Kazi, another member of the mosque’s board who moved from Pakistan to the US more than two decades ago, believes the anti-Muslim rhetoric of many politicians, and namely Republican Party presidential candidate Donald Trump, has given licence to people to threaten or attack Muslims.
Masjid Al Sahaabah is located in Watauga, a small city near Fort Worth. The city has a population of nearly 24,000 people and is home to some 300 Muslims from diverse backgrounds.
In the threatening voicemail the mosque received, a man delivers an angry tirade laden with racist, homophobic and violent language.
Addressing “all Muslims in that centre”, the caller says: “If you think you are going to establish Sharia law [Islamic jurisprudence] in my neighbourhood and this country – in Texas – you are very wrong.
“Islam is a violent religion, and we won’t stand for it,” he continues. “And there are me – and just like plenty of other veterans here in Watauga – that will stand up to your bulls**t.”
Claiming to be “armed to the teeth” and backed by fellow military veterans, the caller advocates for “another Christian crusade” and promises to “meet you on any battleground you want.
“We will cut all of your heads off. Do you understand me? All of you,” he says, ending the message.