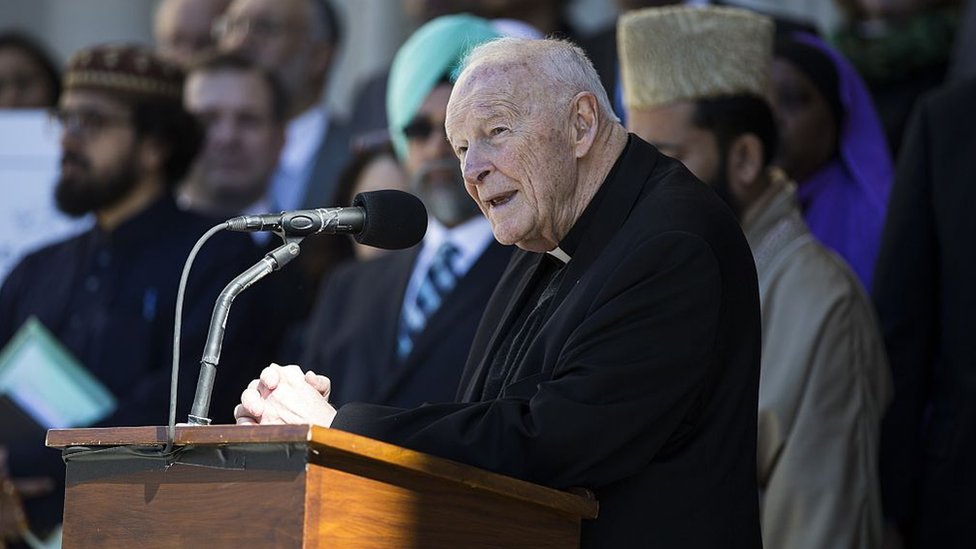 Today, the Vatican released a 461-page report detailing how much the Catholic Church knew about the misconduct of former Archbishop of Washington Theodore McCarrick, who was stripped of his priesthood in February 2019 after a slew of credible allegations of sexual assault and sexual misconduct with minors came out.
Most of the allegations are from his time as Bishop of Metuchen, New Jersey, and subsequently as Archbishop of Newark. Here are some of the most damning and disturbing details of the report.
McCarrick’s victims tended to be the sons of families he was close to or seminarians
An individual identified as Mother 1 in the document provides details suggesting McCarrick would groom her sons and other young men. He would call the sons of families he was close with his “nephews” and would have them refer to him as “Unk” or “Uncle Ted.”
Mother 1 recalls a conflict she had with McCarrick when one of her sons was going to a dance his freshman year of high school. “Ted did not want him to go to the dance, insisting that my son “owed him” and that he should go away on a weekend trip with Ted,” she said. “Ted was intimidating him and telling him that instead of going to the dance he should go with him to a place called Eldred. And the pressure he put on my son reached the point that my son came to me in tears.”
It was known through the Church that McCarrick would take overnight trips like the one aforementioned with young men or seminarians to locations like a Jersey Shore beach house or a New York apartment he had. McCarrick would arrange these trips so that there were more guests than beds, and have one of the boys or men share a bed with him. While the sleeping arrangements were seen as unconventional and perhaps inappropriate, they weren’t immediately tagged as sexual in nature.
Many in the Church were aware, though, of allegations that McCarrick would often ploy these underage boys with alcohol on their trips, and would insist he and his bedmate slept in just their underwear. Multiple individuals reported McCarrick initiating sexual activities in bed such as back massages, buttock fondling, and even attempted penetration.
An individual identified as Priest 4 recalls McCarrick wrapping himself around him when the two shared a bed at the beach house, saying he could feel McCarrick was sexually aroused. “I told him point blank, “I don’t like this,” Priest 4 says. “And he said, “Oh, I’m not doing anything;” “Uncle Teddy is under pressure;” “I don’t mean anything;” “Oh, it’s just a rub down, it’s ok.”
In an even clearer demonstration of McCarrick’s abuse of the power dynamic, a testimony from a Brazilian then-seminarian identified as Priest 3 describes how McCarrick initiated sexual activities on three separate occasions, despite Priest 3 “trying to object.” McCarrick “tried to convince me that priests engaging in sexual activity with each other was normal and accepted in the United States, and particularly in that diocese,” Priest 3 says. He reports feeling “conflicted, confused, and afraid” and especially vulnerable given his immigration status at the time.
McCarrick was brazenly open with his misconducts
Mother 1 recalls a time when she saw McCarrick sitting on her couch with one of her sons on either side, massaging their inner thighs. She adds McCarrick would also embrace her teenage son from behind, holding him close and rubbing his chest.
Even with his more explicit acts, McCarrick could be less than discreet. Monsignor Bottino recounts how at a dinner where McCarrick was clearly inebriated, McCarrick fondled a young cleric sitting next to him. Bottino observed McCarrick “moving his fingers up and down on [the cleric’s] crotch” for several seconds, which was “plenty of time to see what he was doing,” the report says. “As McCarrick was touching him, the young cleric looked as though “he was paralyzed,” with his eyes “wide open” like “a deer in the headlights.””
An individual identified as Priest 1 shares a disturbing account of a night he, McCarrick, and two other priests shared a motel room with two double beds the evening after a fishing trip. As Priest 1 and his bedmate watched TV, Priest 1 looked over and saw McCarrick on top of the priest in the other bed, recalling that the two were touching each other. The priest on bottom said, “don’t worry, everything’s fine,” and McCarrick reportedly told Priest 1, “don’t worry, you’re next.”
Credible allegations of McCarrick’s actions were reported to Bishop Edward T. Hughes as early as 1989, but he covered it up
In 1989, after McCarrick had moved from Metuchen to become Archbishop of Newark, Priest 4 had a meeting with the man who succeeded McCarrick, Bishop Edward T. Hughes. Priest 4 told him about what McCarrick had done to him at the beach house. “Hughes did not react as though he had never heard of McCarrick’s behavior before,” Priest 4 recounts. “He was angry. He turned red. But he was not shocked or surprised by what I was saying. He did not act as though he was hearing something for the first time. I discussed it with him as something that I understood him to be aware of, even if he did not know what had specifically happened to me until I told him. I was speaking to someone who was obviously familiar with what I was describing, as uncomfortable as it was for him to have to face up to it.” Hughes told Priest 4 he would handle it.
Source: W