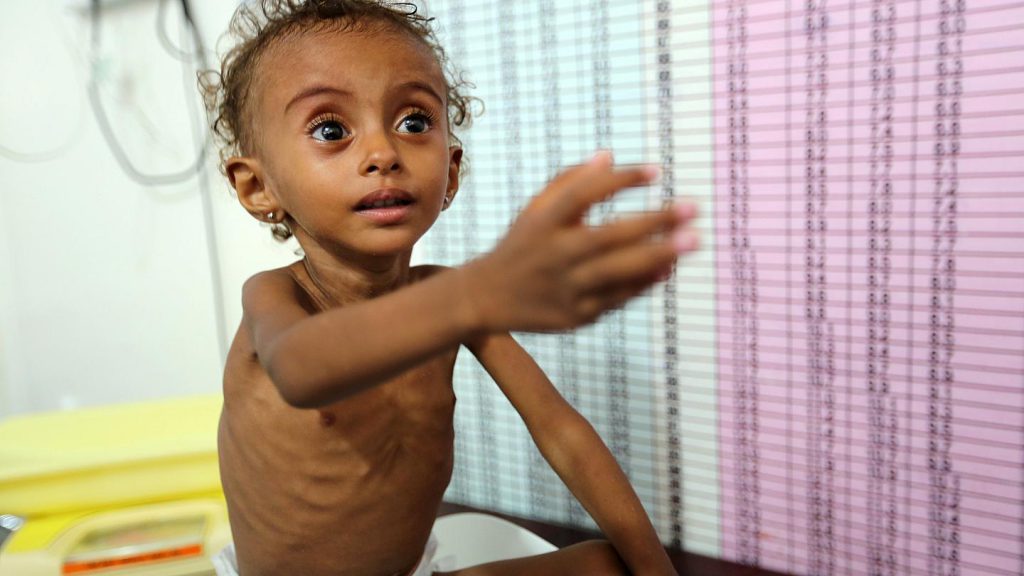 New analysis from the Integrated Food Security Phase Classification (IPC), the global standard for gauging food insecurity, revealed that in some areas more than one in four children were acutely malnourished.
“Acute malnutrition rates among children below five years old are the highest ever recorded in parts of southern Yemen, according to the latest Integrated Food Security Phase Classification”, said UN Children’s Fund (UNICEF) spokesperson, Marixie Mercado. “This new analysis released today puts the number of children suffering from acute malnutrition this year at 587,573, which is an increase of around 10% since January this year.”
The IPC analysis looked at southern parts of Yemen, but a forthcoming analysis of northern areas is expected to show equally concerning trends.
Ms. Mercado said the most significant increase in southern areas was a 15.5% rise in children with severe acute malnutrition, a condition that leaves children around 10 times more likely to die of diseases such as cholera, diarrhoea, malaria or acute respiratory infections, all of which are common in Yemen.
World Food Programme (WFP) spokeperson, Tomson Phiri, said the IPC forecast showed that by the end of 2020, 40% of the population in the analysed areas, or about 3.2 million people, would be severely food insecure.
“Those predictions, from what we are gathering on the ground, are likely to be an underestimate. It is highly likely that the situation is worse than initially projected as conditions continue to worsen beyond the forecast levels. Why is this so? The underlying assumptions of the projections have either been, or are close to being surpassed”, he said.
At the time the data was gathered, it was assumed that food prices would be stable, but that was no longer the case.
Devastating food price increases
“In fact, food prices have skyrocketed and are now on average 140% higher than pre-conflict averages. For the most vulnerable, even a small increase in food prices is absolutely devastating”, Mr. Phiri said.
“Our colleagues on the ground are also telling us that the situation is worse than in 2018 when WFP expanded assistance by over 50% and in the process averted a possible famine. Those gains in 2018-2019, I’m afraid we might be losing them as the conflict continues to intensify and economic decline continues unabated.”
Some families were being displaced for the third or even the fourth time, he said.
“And each time a family is displaced, their ability to cope, let alone to bounce back, is severely diminished.”
‘Entire generation’ at risk – Grande
Lise Grande, the Humanitarian Coordinator for Yemen, said the UN had been warning since July that Yemen was on the brink of a catastrophic food security crisis.
“If the war doesn’t end now, we are nearing an irreversible situation and risk losing an entire generation of Yemen’s young children”, she said in a statement.
Jens Laerke, spokesman for the Office for the Coordination of Humanitarian Affairs (OCHA), told the Geneva briefing that Yemen needed help.
“What can the world do right now? We have been warning for several months now that Yemen was heading towards a cliff. We are now seeing the first people falling off that cliff. Those are the children under five years of age. One hundred thousand of them are at risk of death, we are told. The world can help. The world can help by supporting the humanitarian response plan”, Mr. Laerke said.
Massive underfunding
“I’m sorry to keep repeating that over and over again. It is massively underfunded. It is only 42% funded. It asked for $3.2 billion. We are 10 months into the year. That is way below the funding levels we’ve seen in the past few years. So there is something the world can do. Money can help, and I think, of course, that now is the time to provide that money.”
A staggering 80 per cent of Yemen’s population – over 24 million people – require some form of humanitarian assistance and protection, including about 12.2 million children. A total of 230 out of Yemen’s 333 districts (69 per cent) are at risk of famine.
Despite a difficult operating environment, humanitarians continue to work across Yemen, responding to the most acute needs. However, funding remains a challenge: as of mid-October, only $1.4 billion of the $3.2 billion needed in 2020 has been received.
Source: UN