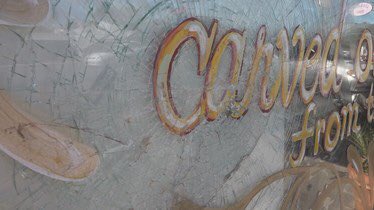 Loyal customers rallied behind a central Phoenix business after it was targeted by vandals for the second time in recent weeks.
Sunday morning, the Middle Eastern Bakery and Deli near 16th Street and Thomas Road had its windows patched up with tape after someone used a blunt object to try and shatter the front windows.
“I can’t understand why you would want to damage someone’s business when they’re just here working, trying to make a living,” said Deanie Houghtaling, one of the store’s longtime customers.
She was one of several people who went to the business Sunday to show their support after another customer posted about the damage on Facebook.
The business has been in the area for 48 years and under the current ownership for the last 10.
“This is actually my first time coming here, said Megan Harven. “We had read about the post on Facebook and thought the best way to show our support was to come out and make a purchase.”
As it turns out, the store is actually closed on Sundays. But the owner, who was there checking on things, still took the time to help the folks who stopped by.
He was completely unaware of Facebook post circulating online.
“He’s a little overwhelmed,” said Houghtaling. “He didn’t know about it, but he seems grateful and touched and was getting emotional.”
While some believe the store may have been targeted by some sort of hate crime, 12 News spoke to the owner off camera.
He confirmed this was the second time the store’s windows had been busted, but didn’t want to speculate as to why they were targeted.
The owner went on to thank his customers — both new and old — for once again rallying behind the business.
We contacted the Phoenix Police Department about the case. They were unaware of any hate crimes in the area but were made aware of what happened.