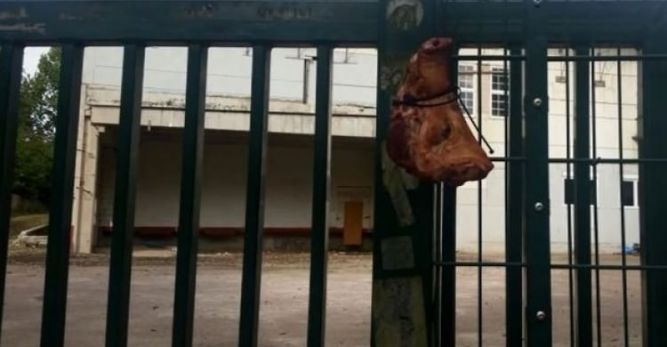 In May of this year a man was arrested in Graz for allegedly hanging two pigs’ heads on the building site of a new mosque being built in the southern Austrian city. The man, who is alleged to have been a member of the right-wing scene in Austria, hung the pair of pigs’ heads on the building site fence and is alleged to have smeared gallons of the blood of the butchered pigs on the minaret of the mosque.
Now, prosecutors in the case are claiming that the man was in fact an informant for the Austrian army and the army was aware of the man’s plans, Austrian public broadcaster ORF reports.
It is alleged by the state prosecutors that the man who defaced the mosque, which is being built next to an already existing Islamic centre, had close ties to the Austrian army in the area. They say that the army staff in Graz had full knowledge that the man was planning to deface the mosque but did nothing to report his plans to authorities or try to hinder him in any way.
The man’s role as an informant for the army is said to have been to infiltrate the far-right scene in the area in order to report on those who may cause trouble for the government. Having been successful in his infiltration, it is claimed that he readily participated in actions that included the desecration of the mosque.
He has since stated that he had informed his commanding officer of his intended participation in the desecration, but that no instruction came from his superiors ordering him to stop.
Michael Bauer, spokesman for the Austrian army, said that they had only learned of the allegations days ago but were adamant they would investigate. Mr. Bauer could not comment on how long an internal investigation would take, but did say that it could be some time.
The site of the mosque in Graz was also the original target of protest by the hipster-right Identitarian youth movement. The Identitarians had to back out of their protest at the last minute due to the police massing a large presence at the site who threatened them with arrest.