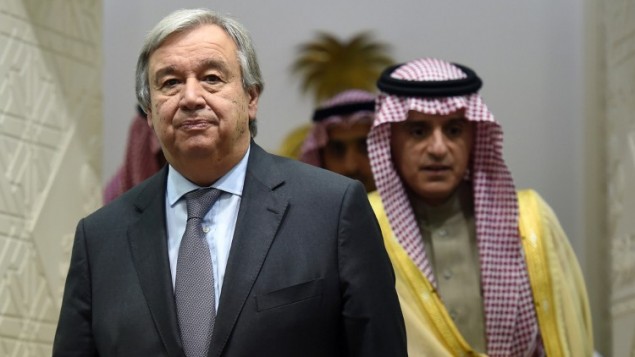 “Islamophobia” in parts of the world is fuelling terrorism, the head of the United Nations said on a visit to Saudi Arabia on Sunday, as anti-immigrant sentiment rises in some countries.
UN Secretary-General Antonio Guterres made the comment to reporters after talks with Saudi King Salman, Crown Prince and Interior Minister Mohammed bin Nayef, and Deputy Crown Prince Mohammed bin Salman.
“One of the things that fuel terrorism is the expression in some parts of the world of Islamophobic feelings and Islamophobic policies and Islamophobic hate speeches,” Guterres said at a joint news conference with Saudi Foreign Minister Adel al-Jubeir.
“This is sometimes the best support that Daesh can have to make its own propaganda,” Guterres said, using an Arabic acronym for the Islamic State (IS) group of Sunni militants in Syria and Iraq.
Source: http://www.middleeasteye.net/news/islamophobia-fuelling-terrorism-un-chi…