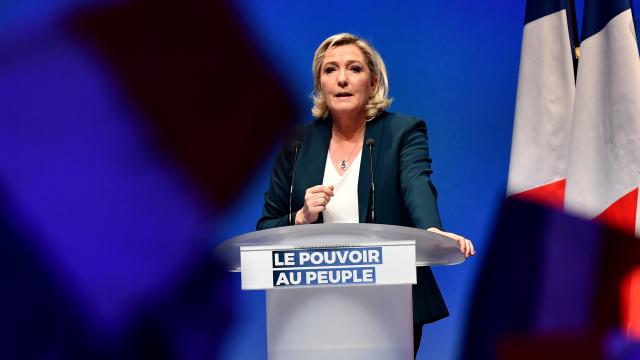 Right-wing candidate Marine Le Pen has pledged to impose a total ban on the wearing of the Muslim headscarf in public places if elected France’s next president.

The leader of the National Rally party, who is currently leading second in polls after President Emmanuel Macron, told BFMTV news on Sunday that she aims to ban the veil or the headscarf worn by Muslim females.

“In reality, I want to extend the law prohibiting the wearing of the veil at school so that it affects the entire public domain,” she said during the interview.

A 2004 law prohibits the wearing or open display of religious symbols in all French schools, but the wearing of the headscarf is not banned in universities or government offices.

While many Muslim women don the hijab and modest pieces of Islamic clothing, several towns in France have local laws prohibiting the wearing of burkinis (fully covered swimming costumes) at the beach or public swimming pools.

Le Pen claimed that she wants to fight against a “totalitarian” ideology, its recruitment, development, and funding.

Her statement on banning the headscarf, which she considers “Islamist clothing”, is part of the National Rally’s proposed “anti-Islamist” bill unveiled last year.

Le Pen has toyed with Islamophobia and is known for anti-Islamic views to garner popularity. She was accused – and acquitted in 2015 – of inciting religious hatred after she compared Muslims praying in the streets to Nazi occupation.