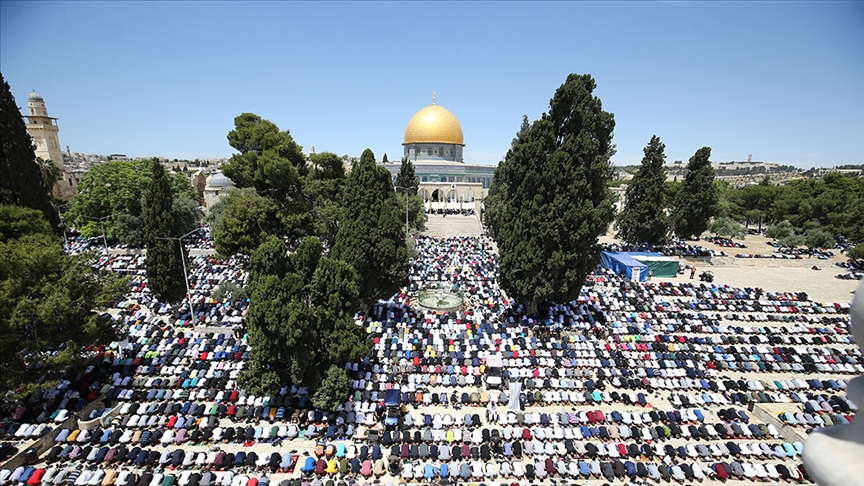 The Defense Ministry announced on Tuesday that some restrictions on West Bank Palestinian movement will be eased for the Ramadan holy month, after a recent wave of terror attacks briefly raised the prospect of the gesture being canceled.

Women, children and some men from the West Bank will be able to freely enter Israel for Friday prayers at Jerusalem’s Al-Aqsa Mosque for the holiday.

Defense Minister Benny Gantz told Palestinian Authority President Mahmoud Abbas in a phone call on Tuesday night that the measures could be expanded further if the terror wave did not continue.

“I emphasized to [Abbas] that Israel is ready to expand its civilian measures during and after the month of Ramadan, in accordance with the security situation,” Gantz said in a statement.

A string of deadly terrorist attacks in recent weeks has shaken Israelis. Officials fear tensions could rise further during both Ramadan and Passover, which are set to overlap this year. Eleven people inside Israel were killed in three terror attacks in a single week in late March.

Abbas issued a rare condemnation after a West Bank Palestinian gunned down three Israelis and two Ukrainians in the central city of Bnei Brak last Tuesday in the wave’s deadliest attack.

Gantz said he told Abbas that he appreciated the PA leader’s denunciation of the attack.

“I told him that the holidays must be a month of peace and quiet and not one marked by terror,” Gantz said.

Under the newly issued Ramadan rules, Palestinian women from the West Bank will be allowed to enter Israel without a permit for Friday prayers at the Al-Aqsa Mosque, said the Defense Ministry’s liaison to the Palestinians, widely known by its acronym COGAT.

Hundreds of thousands of Palestinians from the West Bank regularly patronize Al-Aqsa during Ramadan. The mosque is the third-holiest site in Islam and prayer there is a central facet of the holy month for many Palestinian Muslims.

The flashpoint site is revered by Jews as the holiest point in their tradition: both Biblical temples are believed to have been built on the hilltop.

Around 5,000 Palestinians with first-degree relatives in Israel will also be given permits to visit them between Sunday and Thursday during the coming week, according to COGAT.

There was no immediate change in policy toward the Gaza Strip. Israeli authorities impose far more stringent restrictions on movement from the coastal enclave, which is ruled by the Hamas terror group.

Israeli cabinet ministers signed off on the looser policy last Wednesday. The recent terror wave that left 11 dead had briefly left the policy change in doubt.

All of the loosened restrictions will only apply for the next week, after which security officials will meet again to review the policy and discuss potentially expanding the permit quotas, COGAT said.

For security reasons, Israel tightly regulates the movement of Palestinians from the West Bank and Gaza into its territory. But Israeli authorities regularly ease some of those restrictions or issue special permits during Muslim and Christian holidays.

In a phone call with The Times of Israel last week, a Fatah official, speaking on condition of anonymity, warned that imposing a lockdown on the Palestinians or canceling the looser holiday restrictions would raise tensions between the two sides.