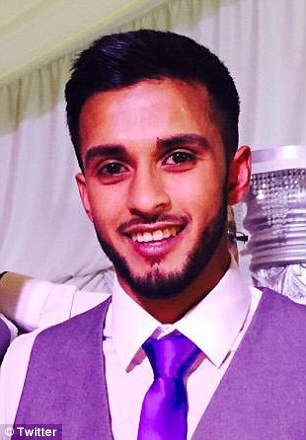 A Welsh Muslim teacher said he was made to feel like a ‘criminal’ when he was kicked off a US-bound flight in Iceland in front of dozens of shocked students without being given a reason.
Juhel Miah, 25, was due to fly to New York from Reykjavik with students from Llangatwg Comprehensive in Aberdulais, Neath Port Talbot, South Wales, when a US official escorted him off the plane in an ‘unjustified act of discrimination’.
The maths teacher – who has a British passport and a valid visa for travel – was then forced to stay in a ‘horrendous’ hotel until school officials could book him another flight home.
The incident unfolded when Mr Miah was refused permission by the US authorities after being selected for a ‘random security check.’
Just one week before the incident, a US appeals court upheld a decision to suspend an executive order by Donald Trump that banned Muslims from seven countries entering the country.
Describing his ordeal, Mr Miah said he was already in his seat when the official approached him.
‘Everyone was looking at me,’ he said. ‘The teachers and kids were confused. I couldn’t believe this was happening.
‘I was being escorted out. It made me feel like a criminal. I couldn’t speak, I was lost for words.
‘My colleagues on the plane and all my kids were looking at me, they were all gobsmacked and all upset.’
Source: http://www.dailymail.co.uk/news/article-4243112/Welsh-teacher-thrown-pla…