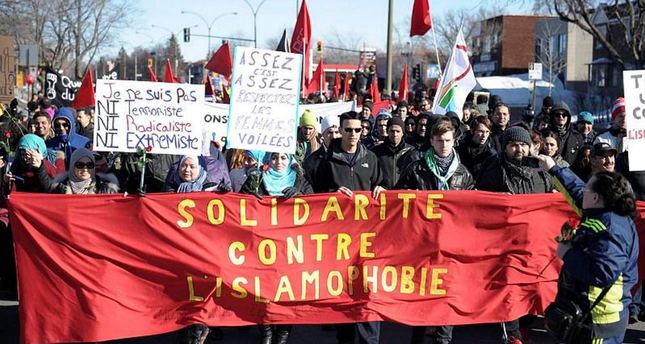 A newly-built Muslim cultural center in Sept-Îles, Canada was vandalized earlier this week, revealing a very troubling sharp increase in reported incidents that are related to Islamophobia in the country.
A 38-year-old man was arrested and then released on a promise to appear in court in six to eight weeks on charges of breaking and entering and mischief, CTV News Montreal reported Wednesday. The photos posted on Facebook show that the Islamic center suffered several thousand dollars in damage. “Plants were spilled all over the floor, a bookshelf was smashed and a computer screen was knocked over and holes were made in the wall,” the report stated. The Islamic cultural center will be closed until the damage is fixed. The center was scheduled to officially open next month for religious services. The Quebec provincial police did not relate the recent break-in and vandalism at a Muslim cultural center in Sept-Îles to a hate crime, CBC news said. However, members of the center are concerned about whether the incident may happen again, as the country has been facing intensified attacks against the Muslim community.
A mosque in the city of Calgary was attacked for the second time in a week. A southeastern Calgary Islamic center in Queensland, Canada became a target of vandalism, revealing a growing number of potential anti-Muslim crimes in the country. The Islamic center’s window was reportedly smashed and the attackers left a burnt copy of the Quran and a hateful letter. The Islamophobic incident came after anti-Muslim posters were posted across the University of Calgary campus, CBC news reported. Students, faculty and administrators gathered at the University of Calgary to condemn anti-Muslim posters that were plastered around the campus overnight. About 40 posters were discovered in various locations by morning, and the university was asking people to turn in any others that are found to campus security.
The increase in anti-Muslim sentiments has emerged after the Paris attacks not only in Canada but in many countries in Europe, as well as the United States. Several European countries have witnessed a spike in Islamophobia and anti-migrant sentiment, especially after receiving an unprecedented influx of refugees, who are mostly Syrians fleeing war and violence. Europe’s populist-right also rushed to demand an end to the influx of refugees from the Middle East in the wake of the attacks.